Back home in Sydney.

Between catch-ups, looking for a new job and enjoying the burst of Spring weather, I've been filtering through the photos from the last 2 months.

A big bulk of Shanghai, Beijing, Lhasa and Kathmandu is still missing from this blog. So expect to see a "retrospective" ( which is a posh way of saying "backlog" cough cough…)

Until then, here's a few pics of the gorgeous Sydney weather. And a reason why I will always miss home when I'm traveling.

Warning: the below pics are gratuitiously CUTE. If you are allergic to cuteness or in any way have an aversion to kawaii, you should log off and walk away from your device now. You should also get your personality adjusted. It's just wrong not to like cute. 🙂

These pics are are mostly of my dog. Of course, my husband, friends and family are another reason to be home, but I don't have cool Instagram pics of them on hand. And they would lynch me if I put them on the blog without prior consent. 🙂

So, why do I love coming home?

First up: clear blue skies. Sydney's a beautiful place to live in, and I appreciate the clean air so much more after having tavelled through places where polluted haze was more normal than blue sky. 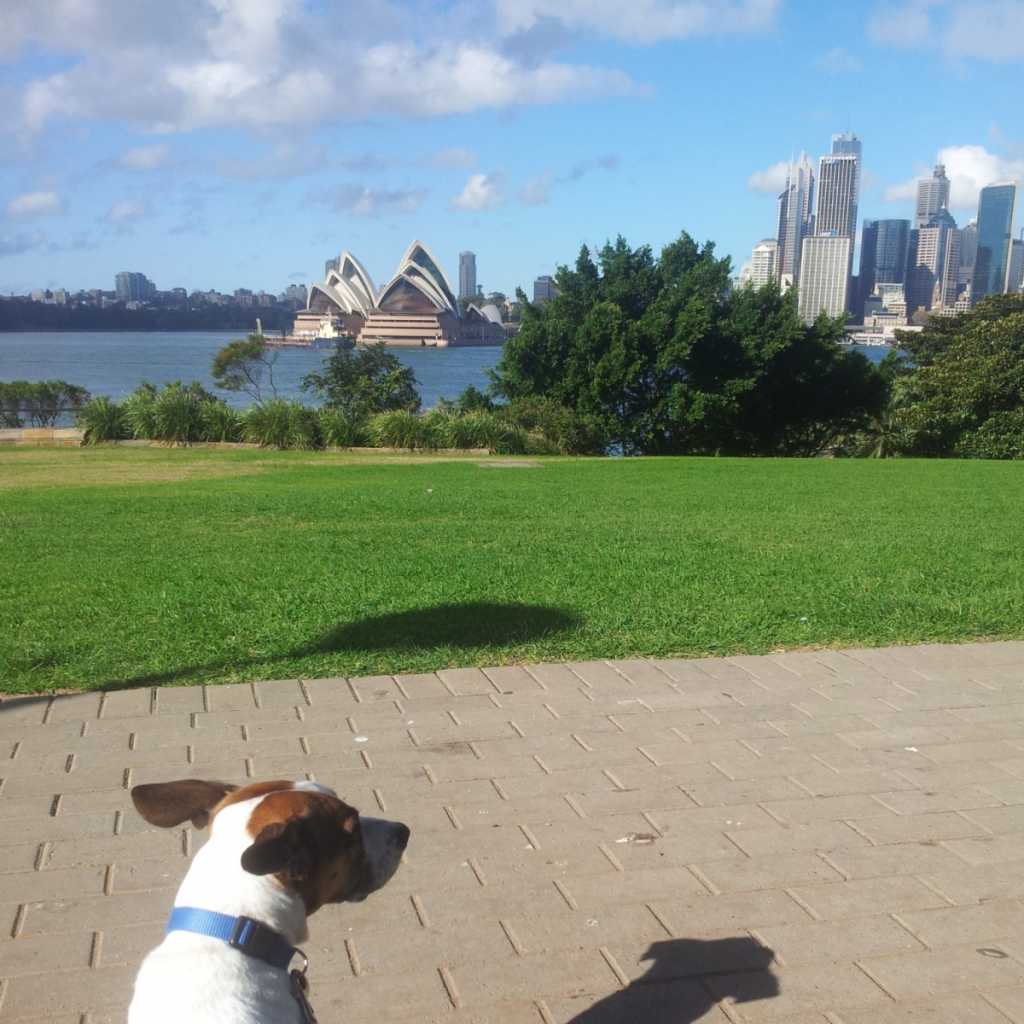 And of course, Toby. He's about 12 years old now…we aren't really sure because we found him about 10 years ago. The below is a rare pic of him "smiling" as his normal face is one of disdain and usually gains him the pity of humans. He has owned this look for years and uses it well, eliciting pats, affection and in many cases, alms of food.

This pic was taken before my trip. We had a walk along his favourite stretch of beach, which is part of a dog park. A place where dogs are allowed to walk for miles off the lead? Next to a beach? Yup, another reason to love home.

This pic below was taken AFTER I got home. You'll notice Toby has a shaved portion on his back, and there's a dark line in the middle of that running along his spine. It's from spinal surgery he had about 8 weeks ago. I was in Tibet when my husband called me with the news that Toby had stopped walking and was going in for urgent surgery.

Being an awesome mongrel breed, of a Jack Russel cross Staffie (we don't ask how that happened), Toby was back on his feet (albeit a bit wobbly) a day after surgery. This was taken last week. Super-mongrel. 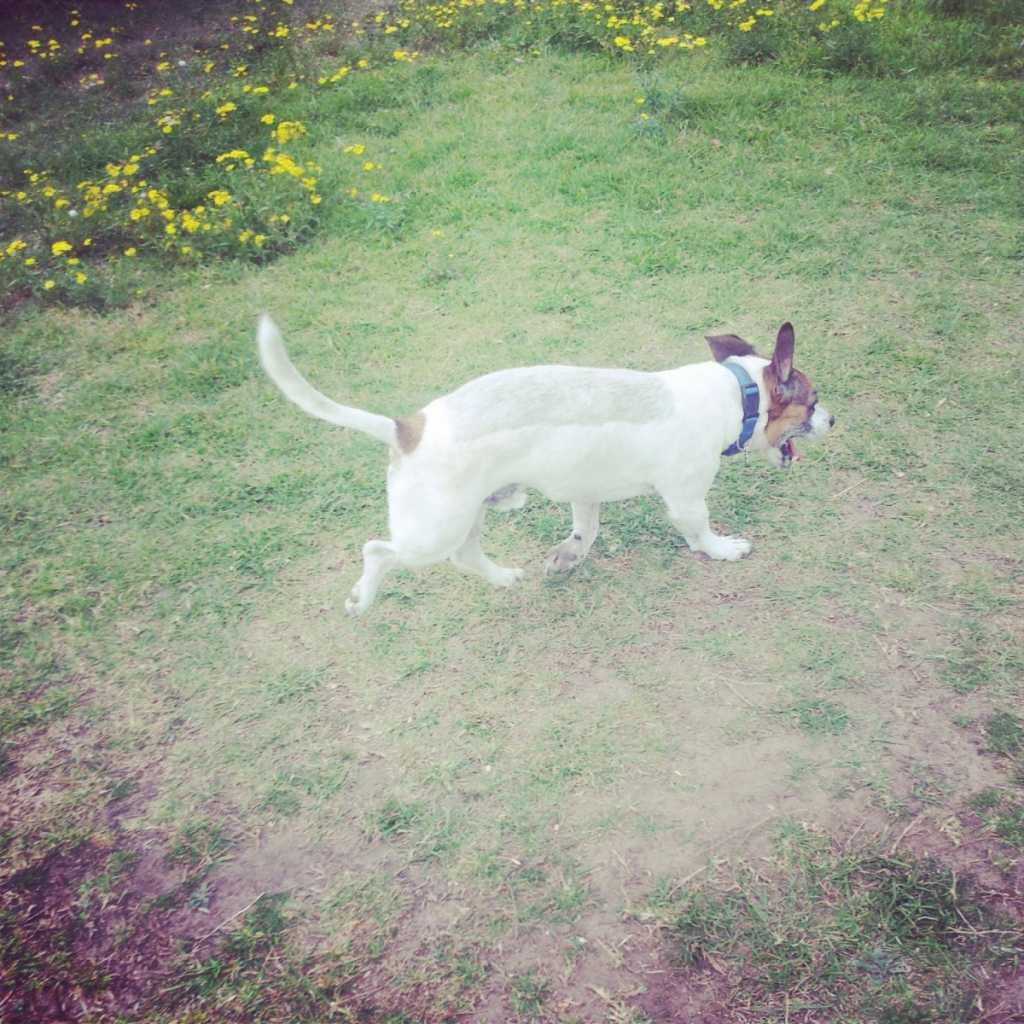 This pic shows him walking in the same dog park, just last week.
I now joke that the dark line on his spine is where they put in the replacement batteries. 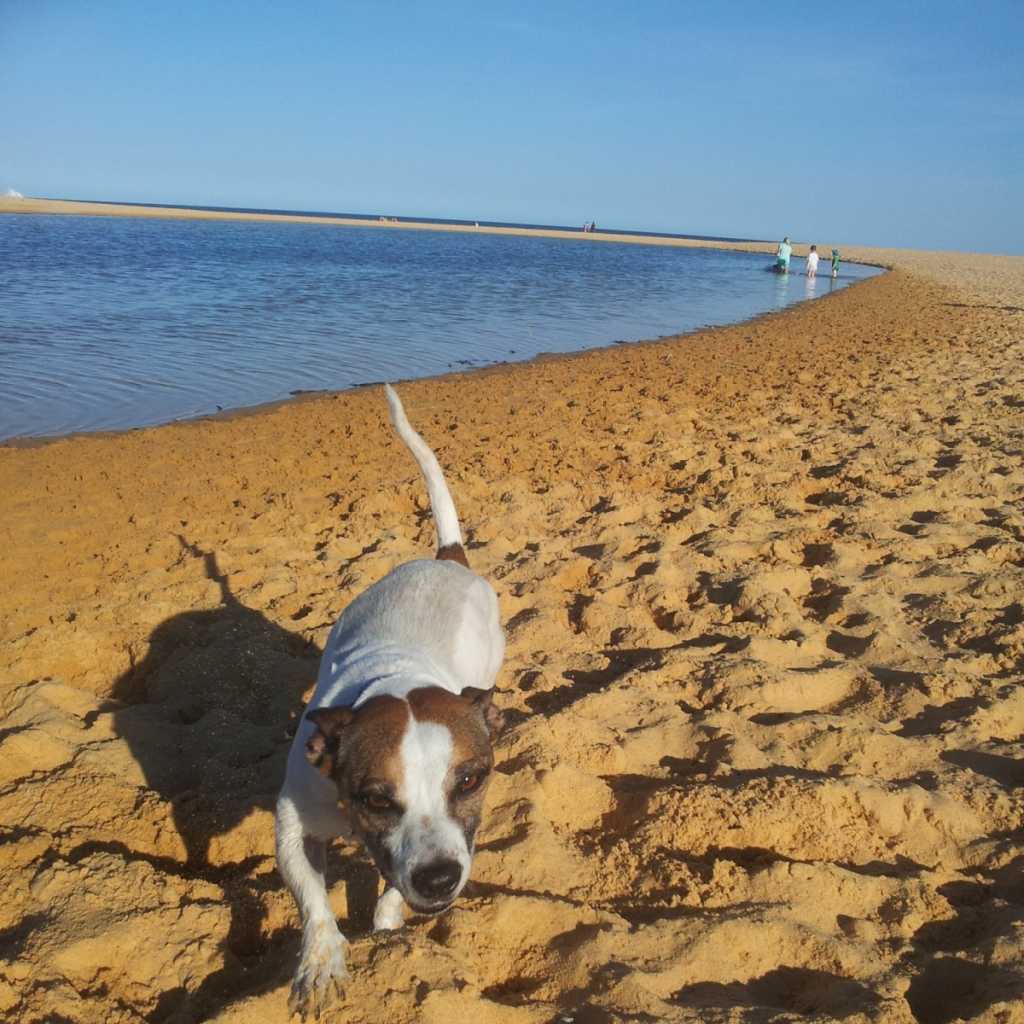 This is my home….ok so not the beachfront. I don't own that, and I don't live on sand. This is my local beach. It's clean, family friendly and has cafes and great coffees across the road.

Clear water. I just had my first swim on the weekend. It was initially freaking cold, but after a few minutes it warmed up and it felt glorious to be able to be in such clear water. So incredibly cleansing and refreshing. Nature is beautiful and what I love about home is that it is so accessible and as pure as you can get even though it's close to urban areas with us dirty humans around it. Hooray for nature!

Getting the news that Toby wasn't walking when I was overseas made me realise how much I loved the little guy. A dogs life-span is shorter than a humans. It's a given that you're setting yourself for major heartache when you adopt an animal.

It also made me question whether I should be on the trip, but I knew it was impractical for me to fly back, and I really had to put my priority on traveling with my mum. If money wasn't an option, I guess I could have flown back, seen how the operation went, and then joined mum back in Tibet.

I guess that's what life is. An adventure. The highs and joys, coupled with lows, risks and danger. Even without travelling, that roller-coaster of life is there, and the subject of mortality comes up every now and then.


So besides the serious stuff….here's a last pic.

I mean, come on. Isn't a cuddle from Toby a great reason to come home? Well, for me, it is (amongst other hugs from a certain male human)…and has been for years when I was working and getting home pretty late on some days. His waggly tail, his "pity-me" whines and his eager affectionate eyes were enough to make the day seem less "blah". And hopefully he will continue to make my home-comings that much more "kawaii" for many years to come.