Every 15th of January, the villagers of Nozawa Onsen gather for the highlight of the Dosojin Matsuri.

Matsuri means festival, and Japan is filled with many matsuri throughout the year.

The “Dosojin” are Shinto guardian deities, and come in various forms, from tall stones to short stout statues and in Nozawa Onsen, they are usually carved as a couple – a man and a woman. They are considered benevolent, and protect travellers and are often seen at the boundaries of territories.

At Nozawa Onsen, the annual festival celebrates the Dosojin of the area. The Nozawa Onsen Dosojin Matsuri is considered one of the three most important fire festivals in Japan. It is an important cultural festival which is an invocation for a good health, bountiful harvest and (in recent years) a successful ski season.

Months before, over 100 villagers are involved in building the wooden structure that is called the shaden. It is the shaden that is the at the core of this ritual. After it is built, it is endowed with the Dosojin through a ceremony that is invoked by a priest from the Kosuge shrine. So it is essentially, the wooden structure at the heart of this ceremony is a religious shrine to the Dosojin guardians of Nozawa Onsen.

Men aged 25 and 42 participate as their ages roughly translate in Japanese to the same words as “death” and has an aura of bad luck. To counter this age of bad luck, they participate with gusto at the Dosojin Matsuri. They act as either attackers or defenders of a wooden structure. The attackers try to burn the wooden structure (called a “shaden”), the defenders, well, you guessed it, they defend. And they do so with passion and violence. Some have left the Dosojin Matsuri with third-degree burns to their faces, if that gives you any idea of the level of investment these participants give to their roles.

There are 2 other structures to either side of the shaden, which to me, looked very similar to Balinese ritual totems that I’d seen on my travels. They are beautifully decorated and have the names of all the children born in that year written on the paper hanging from these structures.  I am not sure what they’re called – if anyone knows, please let me know! 🙂

You can find out more about the festival on Nozawa Onsen’s website here.

And please take note of the “Some suggested protocols for the Nozawa Fire Festival” section on that page.

A few tips to help you enjoy the night:

As you’ll see from the photos below, the location isn’t dotted with shops or stalls and rest rooms. The location is in a bare valley and it’s just the pure energy of the ritual. 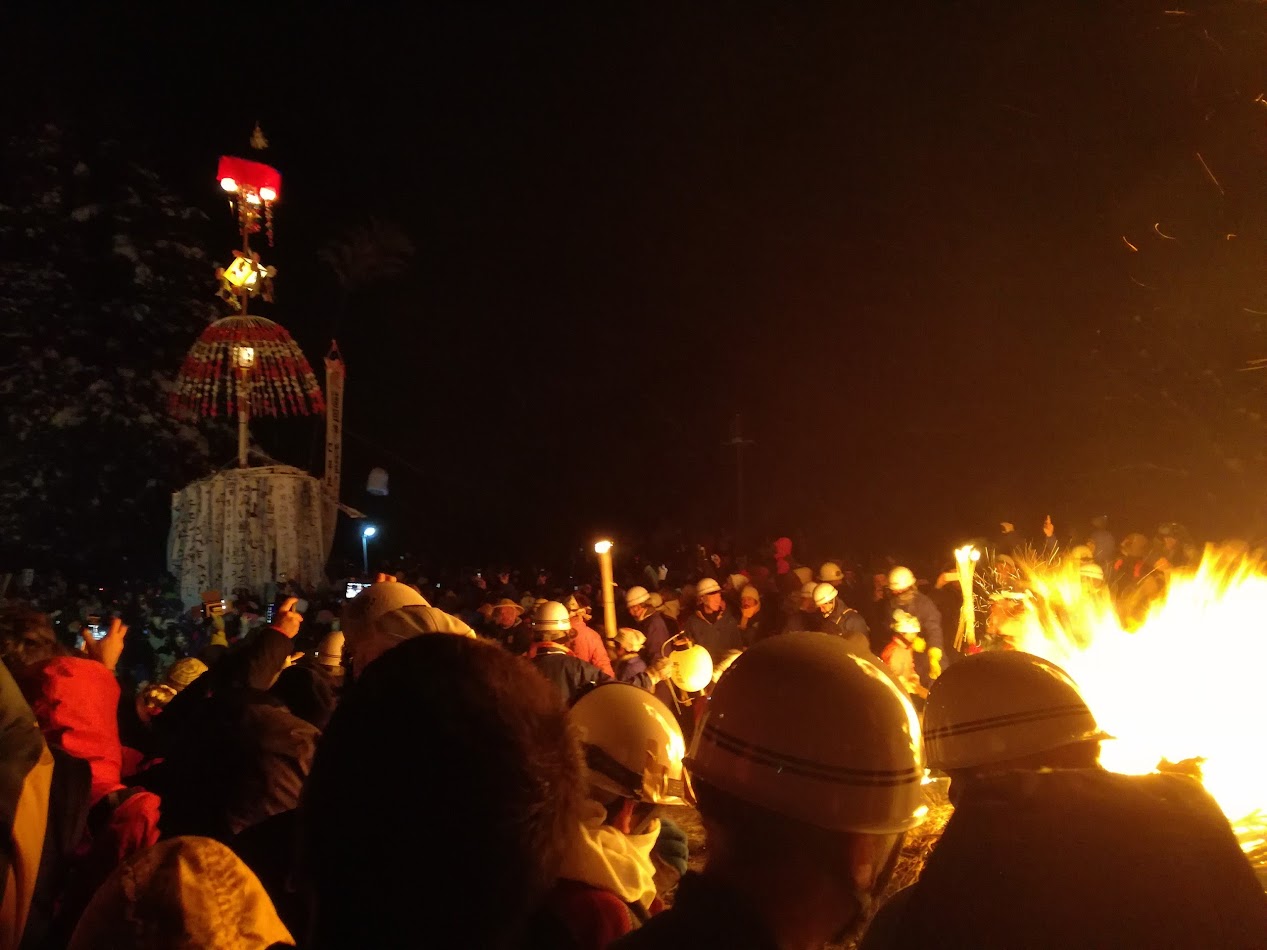 The men with the helmets were holding a thick rope between them to act as a barrier to keep the crowd a safe distance away from the fire. 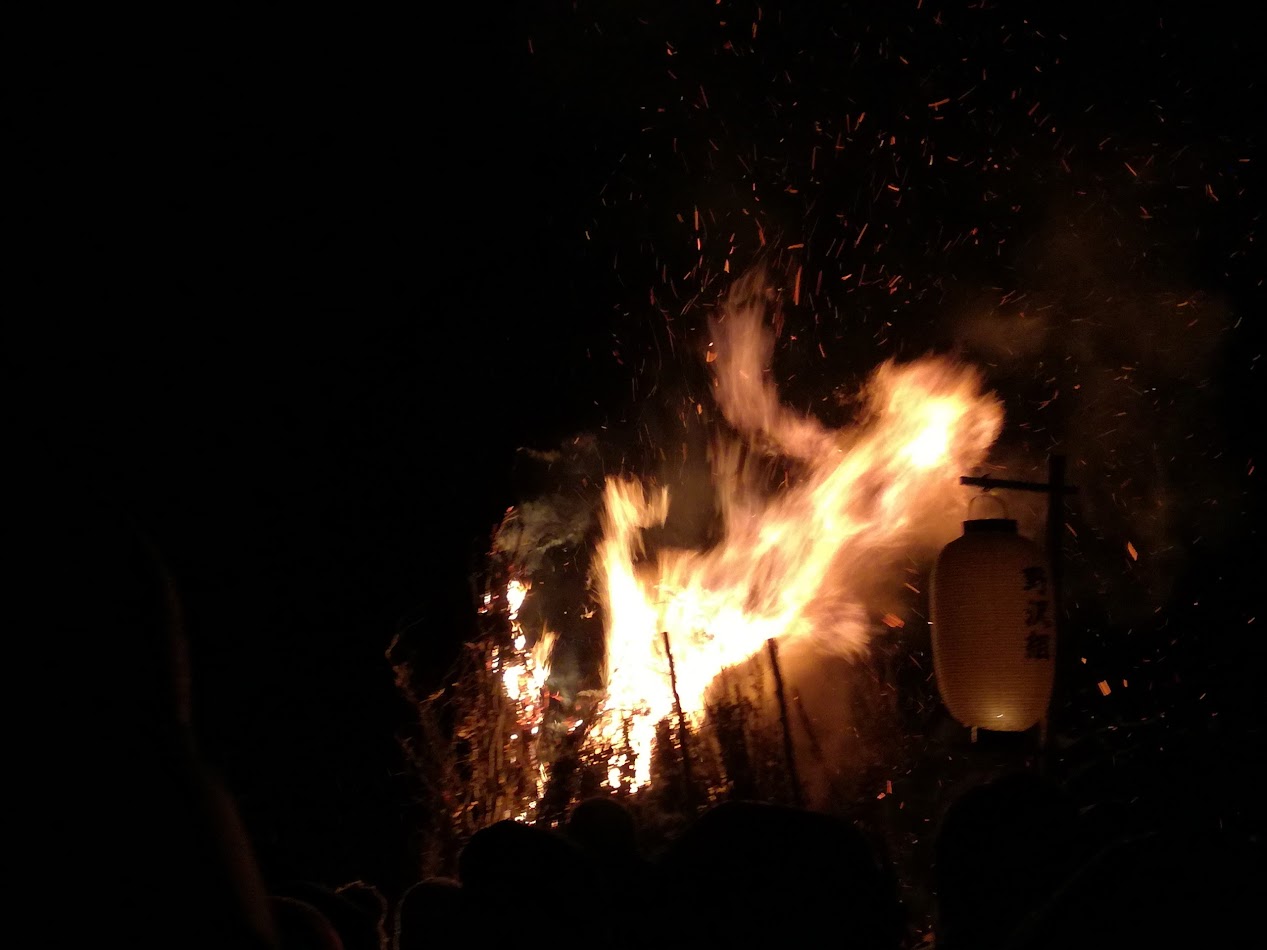 Building up the bonfire. 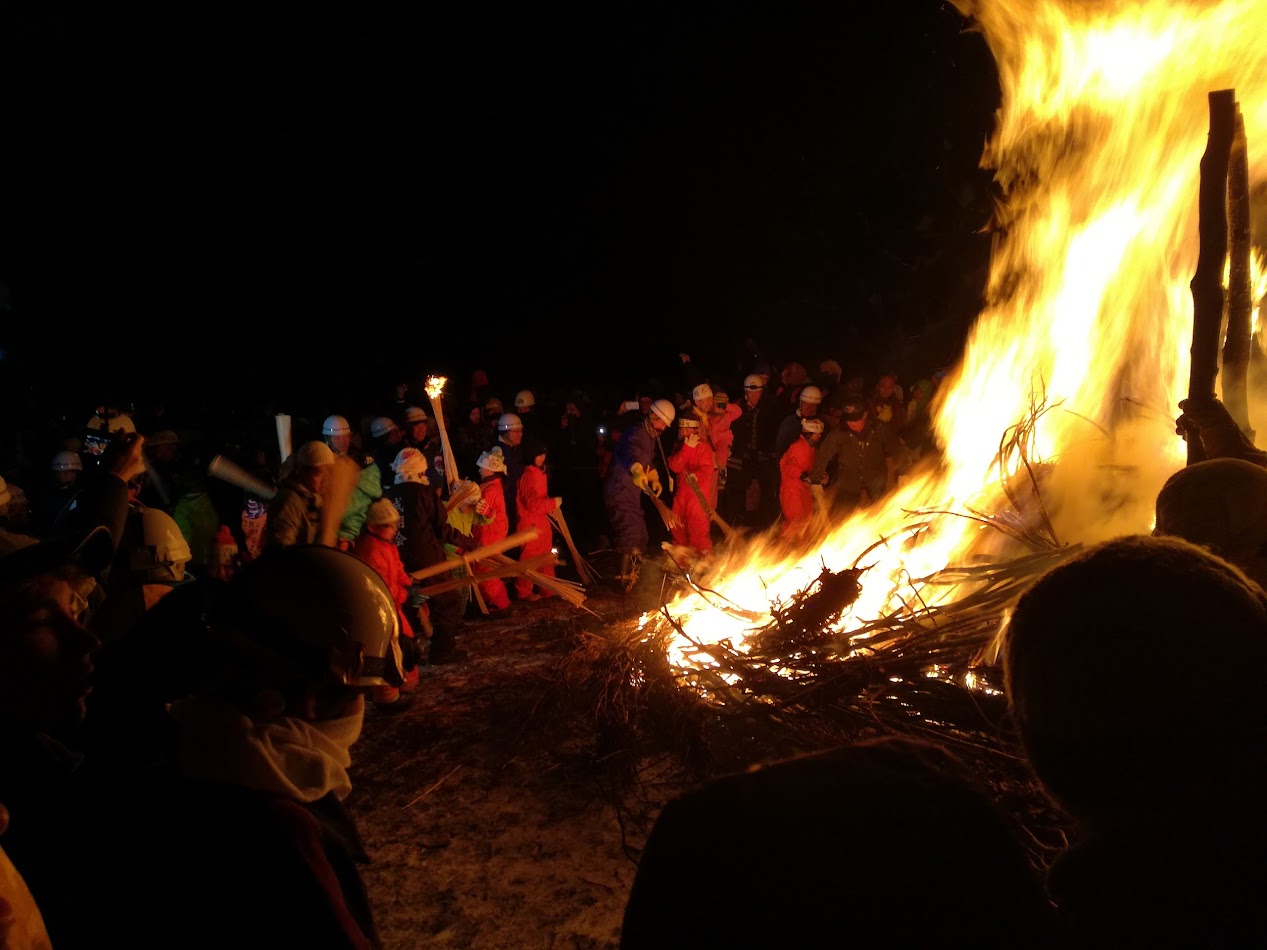 Young Nozawa Onsen villagers being shown how to light the torches at the bonfire. It was great to see the tradition being handed down and they had lots of fun! 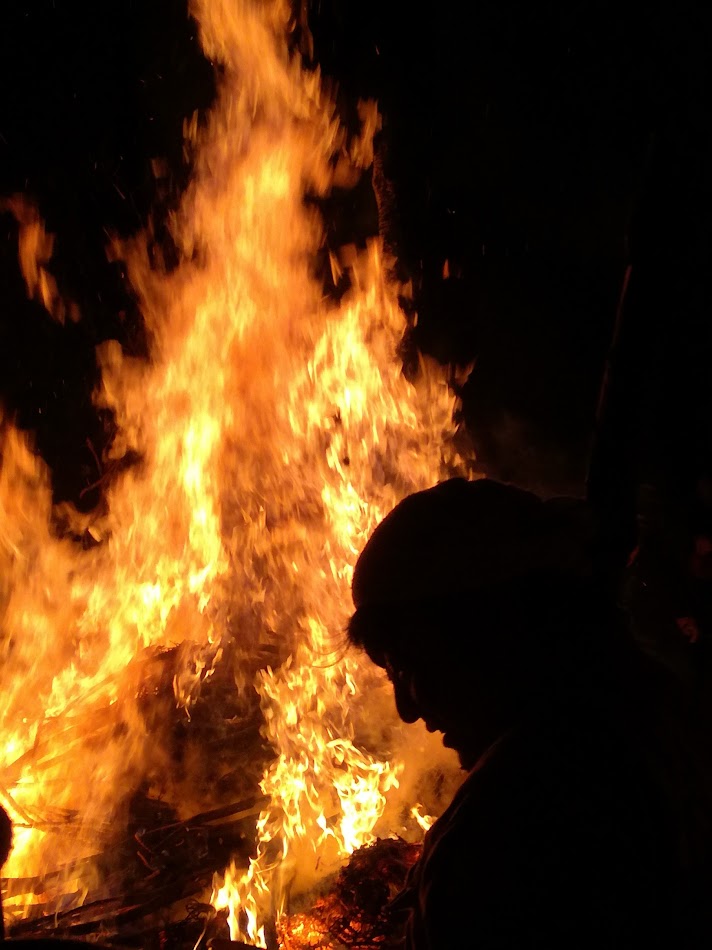 Bonfire keeper. His job was to keep the fire going, and he was closest to the fire. I loved the silhouette of his smile against the fire. 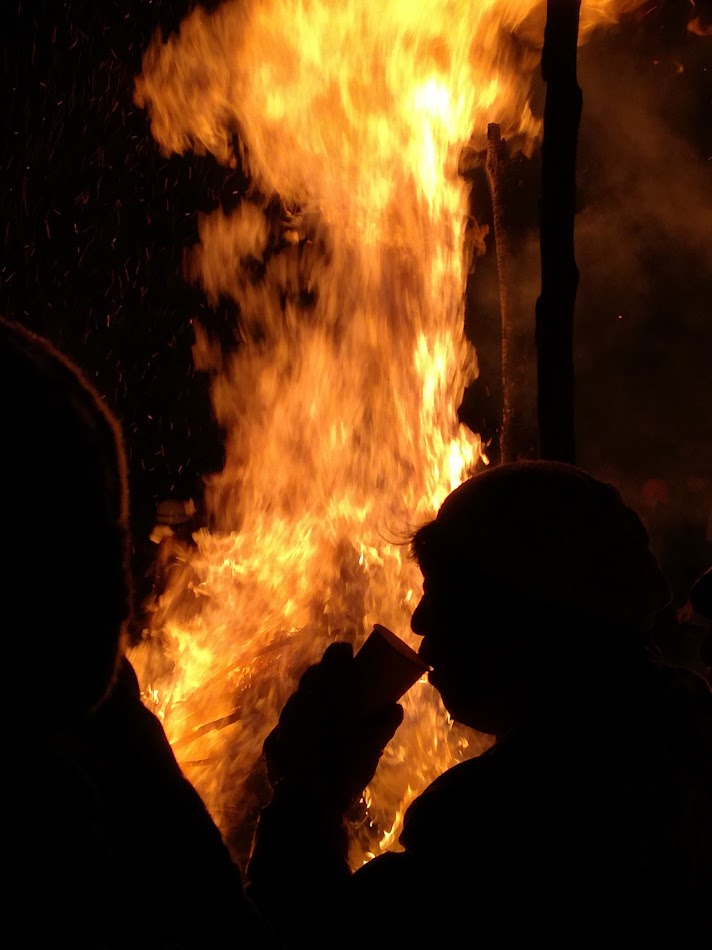 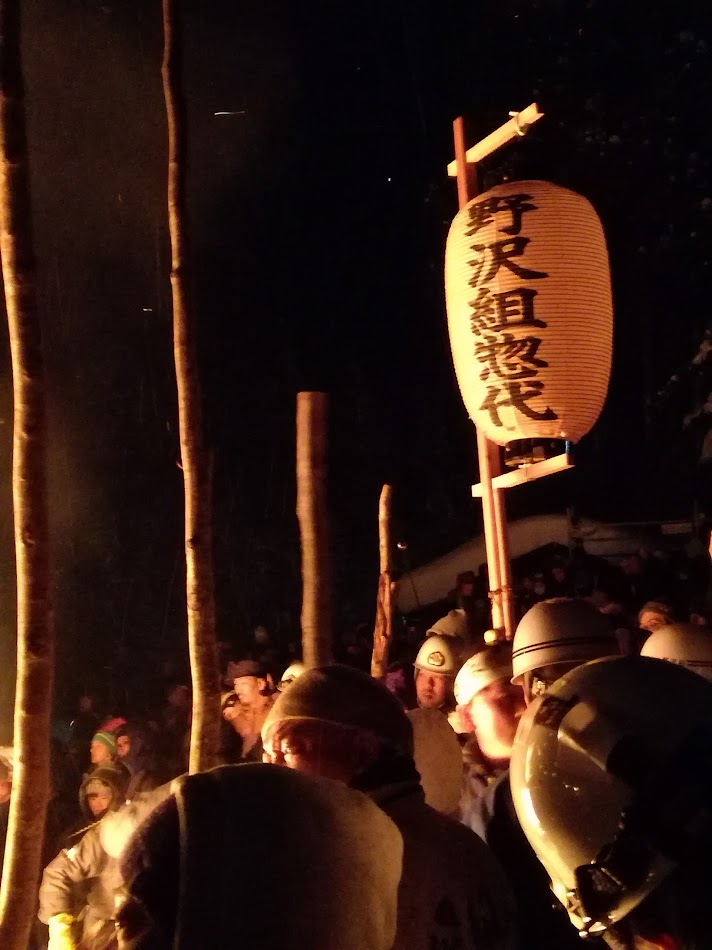 One last note, and one which I think this really applies wherever you go.

The villagers are taking part in something they consider important and spiritual. There’s lots of alcohol (sake), for them to drink as it’s their big annual celebration. So although it’s a bit of a local piss up and they’re generous to share the booze with us, it’s still an important ritual to them, so please be respectful and don’t treat it like you’re at a music festival.

In recent years, many tourists, sadly Western and Australian tourists, have treated it more like a fireworks display rather than an important local ritual.

As an outsider to Nozawa Onsen, or an outsider to any ceremony, I felt that my first Dosojin Matsuri was spectacular, but it was annoying to have a tourist near me go on and on loudly to his friends about his flirting and sexual prowess with a girl at the local bar (Stay Bar…where everybody knows your name and, apparently, your STD). Cool story, bro. Can you stfu now so I can just enjoy the festival?

Actually, this group moved away from me after a few minutes. But my husband did get stuck next to another group who were swearing loudly and he did say “Guys, this is a spiritual ceremony, so please would you pull your head in?”. The answer he got was “But we’ve been drinking since 4pm!” which is kinda the reaction you expect from self-absorbed drunks. But at least he tried. He moved away and hopefully those lads had a think about what they were doing.

So, based on that most recent experience and others I’ve been told of, here’s a list which I hope us visitors keep in mind for next year’s Dosojin Matsuri:

This is Nozawa Onsen’s story. This is their big annual festival that they’ve been preparing for, for months.

We wouldn’t want anyone being obnoxiously rude at our local ceremony.

In fact, at any festival, ceremony or celebration of any kind around the world, surely you want to give the same level of respect you would ask for?

Protecting the local village ritual is vital for its success and unfortunately, the current situation is that many returning tourists (and locals) who love this ritual are staying away because of this behaviour.

Despite that, and perhaps for that very reason, we need more people to come to the festival who will respect it and who will appreciate it for the cultural experience that it is!

DO join in the fun and partake of the free sake, and enjoy the spectacular sight of the ritual. It is amazing to watch. Nozawa Onsen’s wonderful ceremony deserves to be celebrated and I hope these photos show the dedication and energy of the night. 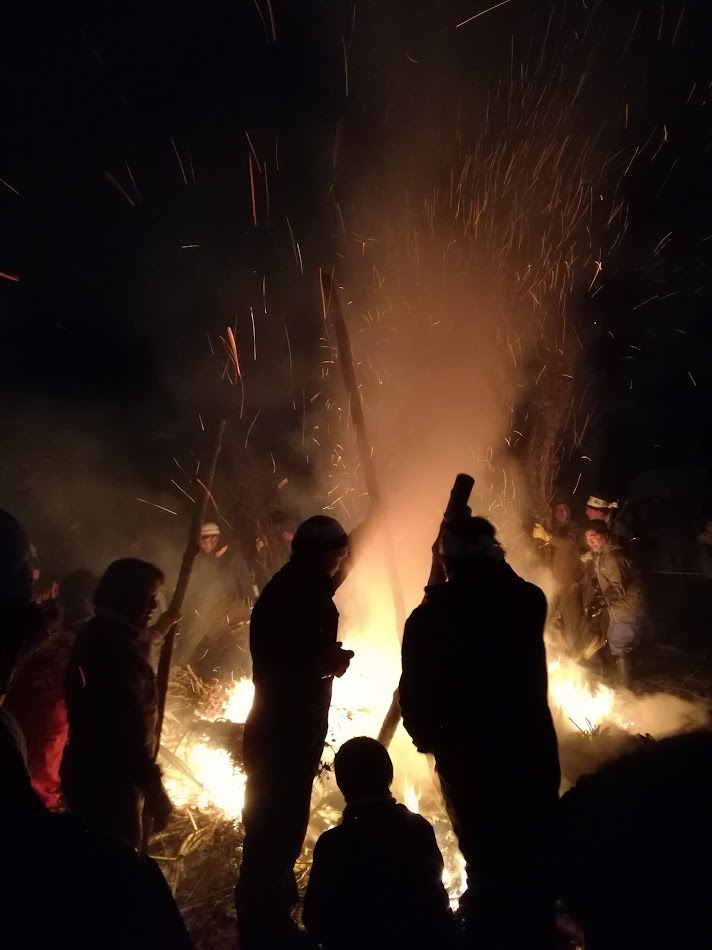 The bonfire dying down and being stoked by bonfire keepers. The light and warmth was a relief, but there was a lot of embers, too, so be warned if you stand near here! 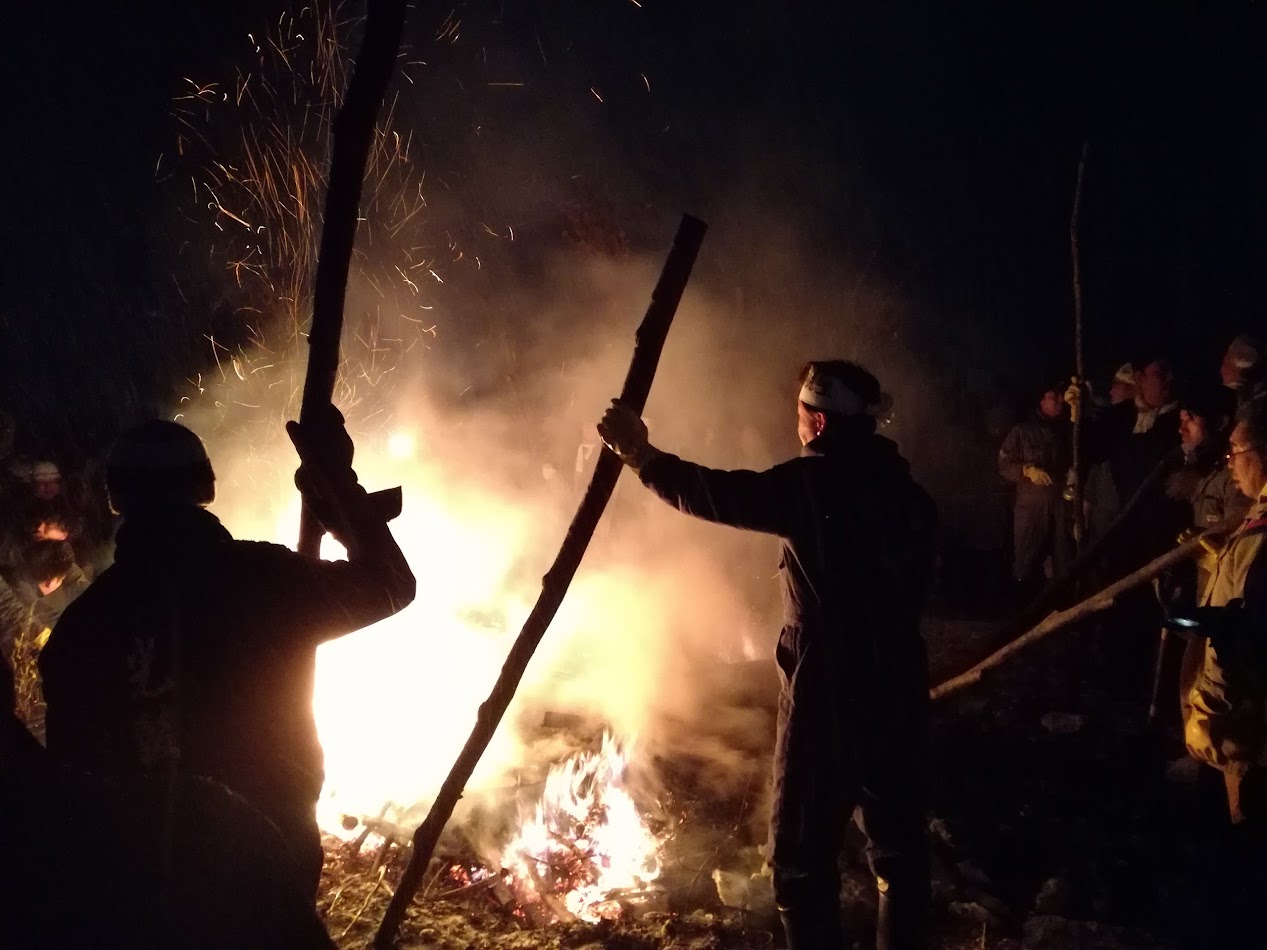 Members of the community take turns to stoke the bonfire. It’s hard work and the smoke can be hazardous. 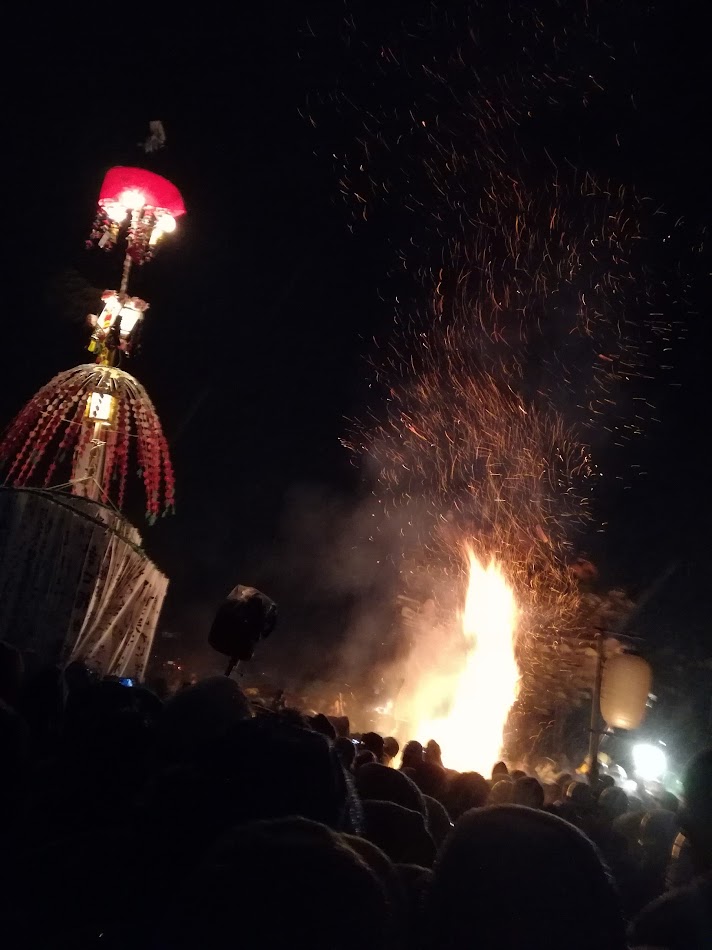 As the ceremony continues, the bonfire is moved closer and closer to the main structure. 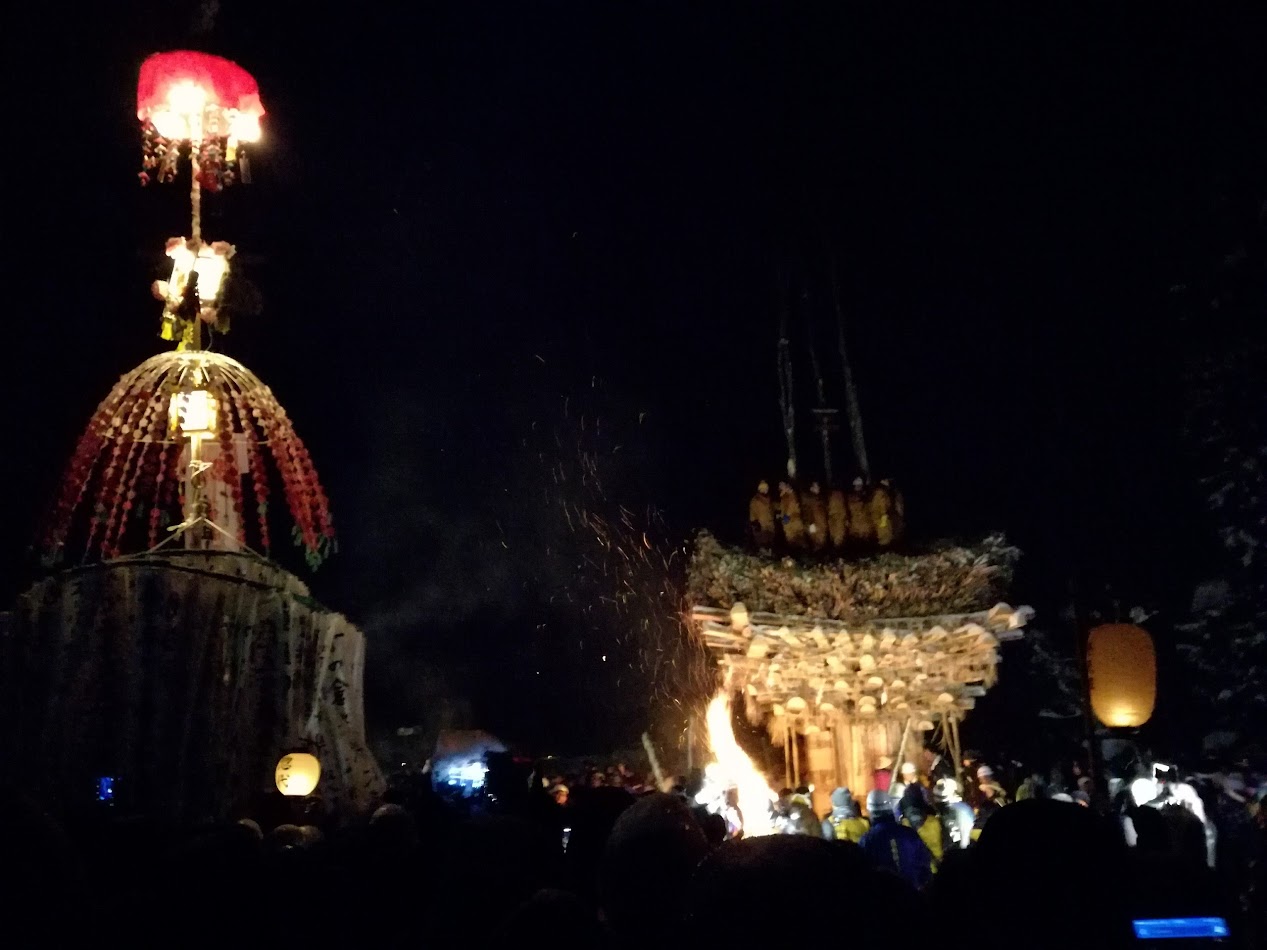 A blurry close up of the guys standing on the shaden. 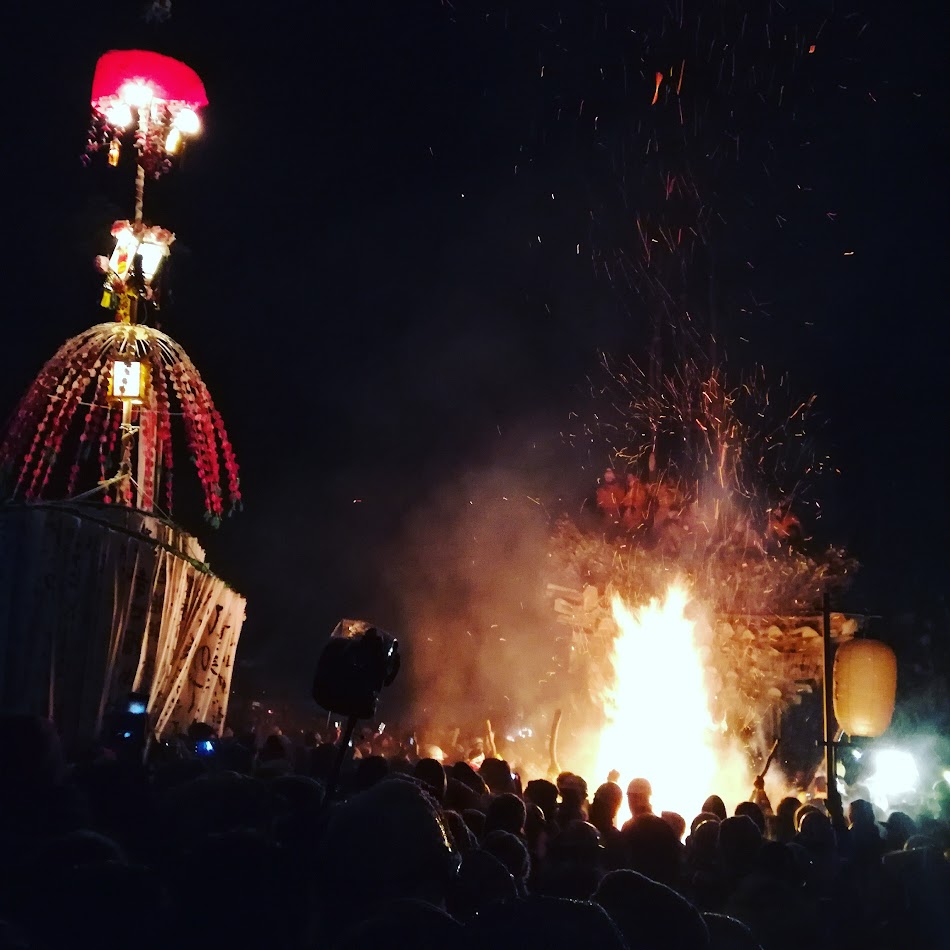 The bonfire has moved all the way to the front of the shaden, here. At this stage, one of the totems on the side is then pushed onto the flames. Soon, the next totem is pushed into the fire and then finally the large main wooden structure is set on fire. 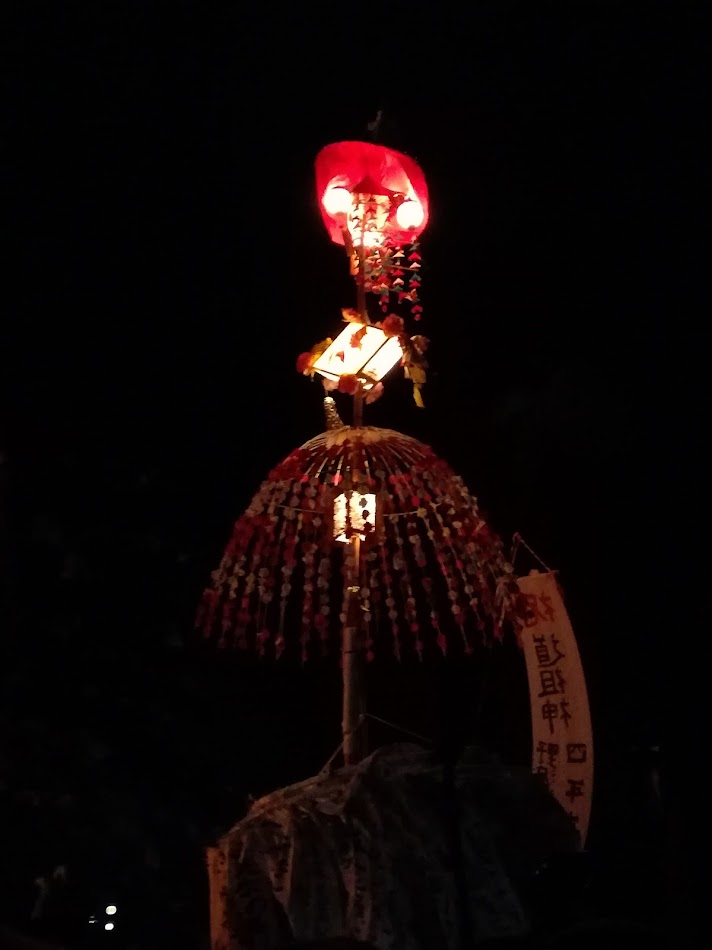 One of the two totem pole structures that stand beside the main wooden structure (shaden). It was beautifully decorated. Does anyone else see similarities in this structure with some Balinese ritual constructions? 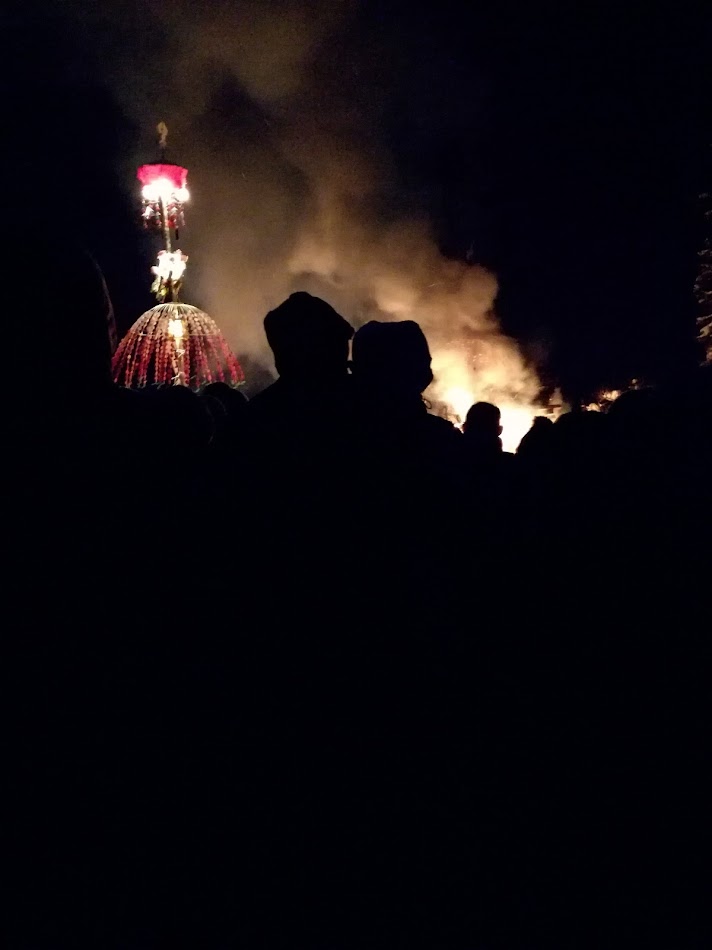 Couple snuggling in the cold at the Dosojin Matsuri. I liked this shot because it reminded me of Nozawa Onsen’s Dosojin – the male and female energies. Let’s be like this couple – chilled, mellow and enjoying this amazing ritual that the villagers allow us to share. 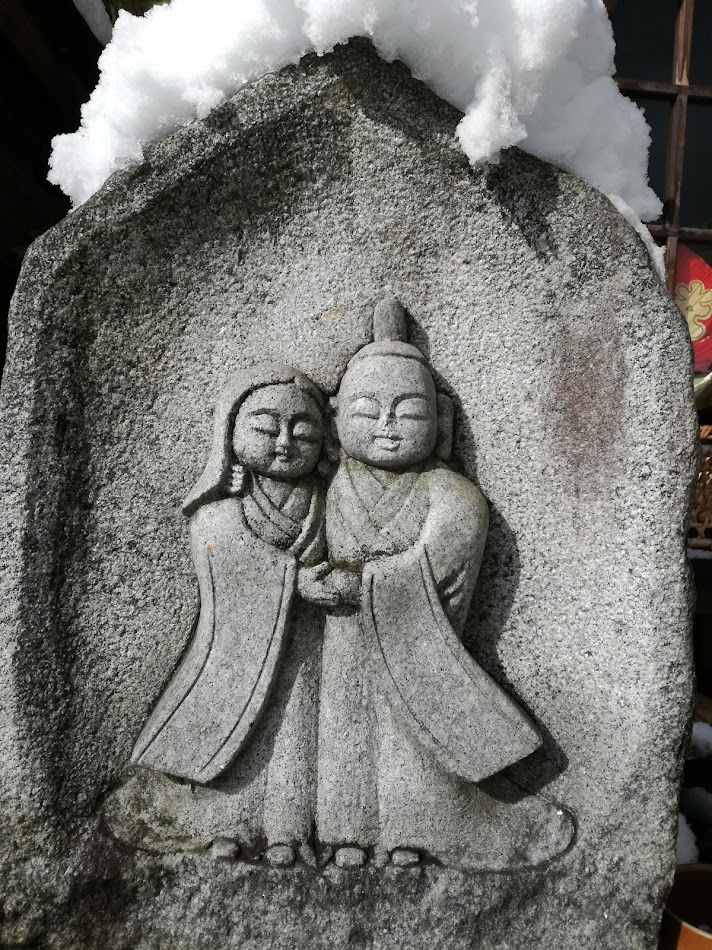 Dosojin statue near the Nozawa Onsen old hot springs near the temple.

I’ve stayed at Nozawa Onsen 5 times, and I love the welcoming nature of the villagers and the balance of it being a killer snow resort destination as well as a fascinating cultural destination. Nozawa’s residents deserve the success and the respect that we would expect in our own countries.

The fire festival is visually spectacular, with the different groups of men chanting and singing together to bolster spirits in the freezing conditions. Seeing them welcome us, give out free alcohol, sharing the tradition with their kids, and sharing this ceremony freely with foreigners without touristy trinket stalls speaks to the authenticity of this ritual.

It is an astounding feat of human energy and embodiment of belief. It is electrifying.