Kanazawa is one of my favourite cities. With aspects of old Kyoto, one of the most beautiful gardens in Japan (the Kenro-Kuen Gardens), and a world-class Modern Art museum, it has everything I could ask for. 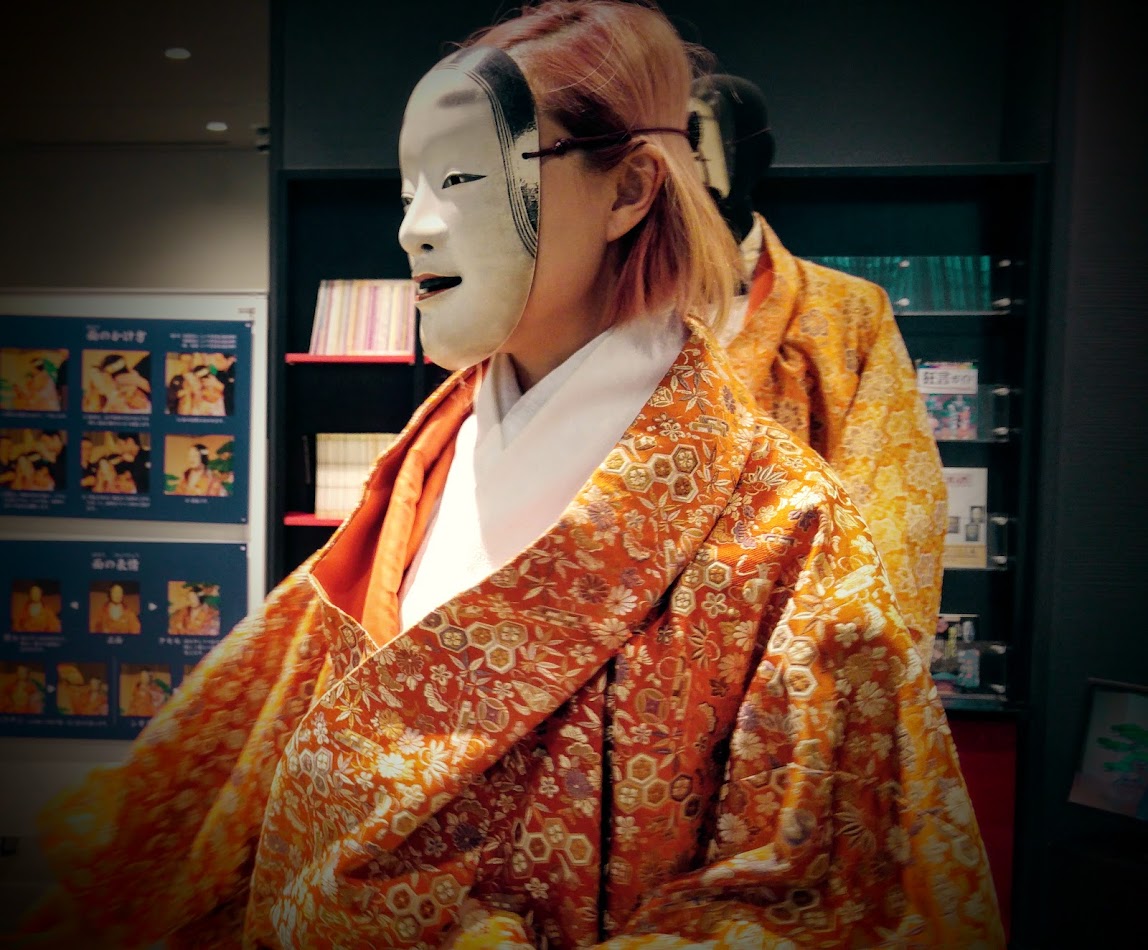 We visited for a second time, early this year. And we discovered another part to Kanazawa that I highly recommend to any visitors.
It’s here in Kanazawa that you can also enjoy one of the best Noh museum experiences.

The Kanazawa Noh museum is located next door to the 21st Century Museum of Contemporary Art. You can buy a combined ticket from the Noh Museum that gains you access to both the modern art museum and the Noh museum.

The exhibition is quite extensive and it was larger than the Noh museum in Nagoya. Explanations on the exhibited masks and artifacts were in English, so foreigners, it was extremely insightful.

In addition, when we went, we were lucky enough to have had an English-speaking volunteer who was managing the Noh costume & mask exhibit. This part of the museum allows visitors to choose a mask and wear it. A stage costume, which was once worn by performers has been donated so you can wear it, and the mask on the stage which is part of the museum.

The volunteer was very friendly and professional. A lovely grandma lady – Aikawa Yoshimi – she spoke perfect English and encouraged me to choose a mask.

To be honest, it was an eerie yet fascinating ritual.

There were masks for men and women. You must choose a mask according to your gender, and you are allowed to choose any age. However, you are not allowed to touch or pick up the masks until you choose the mask you want to wear.

There is a strong element of respect when you are introduced to the masks. They each have an identity. Each mask has an individual name. Now, this is not the name of the character in the Noh play, this name is a unique name given to only that mask. The name of the mask is given to it by its carver, like an individual child. All the masks on display were made by the same carver and named by him and once I knew this, the masks in this exhibition took on a deeper level of significance. Not just as individual pieces, but to me, they felt like a family I was visiting. And I was asking them to let me into their fold for a while.

As I stood looking down at the row of  5 female masks, from a young girl to old woman, I felt as if the masks had an energy all of their own.

Each mask had different emotions depending on how you looked at it (from above or at table level or close up). Sometimes aloof, sometimes yearning, sometimes angry….Perhaps it was the artistry of the carver, as the nuance of emotions in the live performance are meant to be demonstrated by the Noh performer by tilting his head slightly up or down.

And as the masks are made from wood, there was also the sense of warmth and familiarity that came from the material, even though I couldn’t touch them. It was a slightly off-putting feeling that I was conscious of.

Of the 5 masks, only 3 (girl, teen & young woman) wore the kimono that I was allowed to try on. So, in order to try on the kimono, I chose the oldest of the three – a mask named “Magojiro”. The other 2 masks were of a 50 yr old and old woman masks. I am a little sad I did not remember to ask their names.

After I chose my mask, I stepped onto the corner of the stage and was helped into the kimono and seated in front of a large, long mirror. The volunteer, Mrs. Aikawa, dressed me and showed me how to walk across the stage, manouvering in the long embroidered kimono that draped around me. 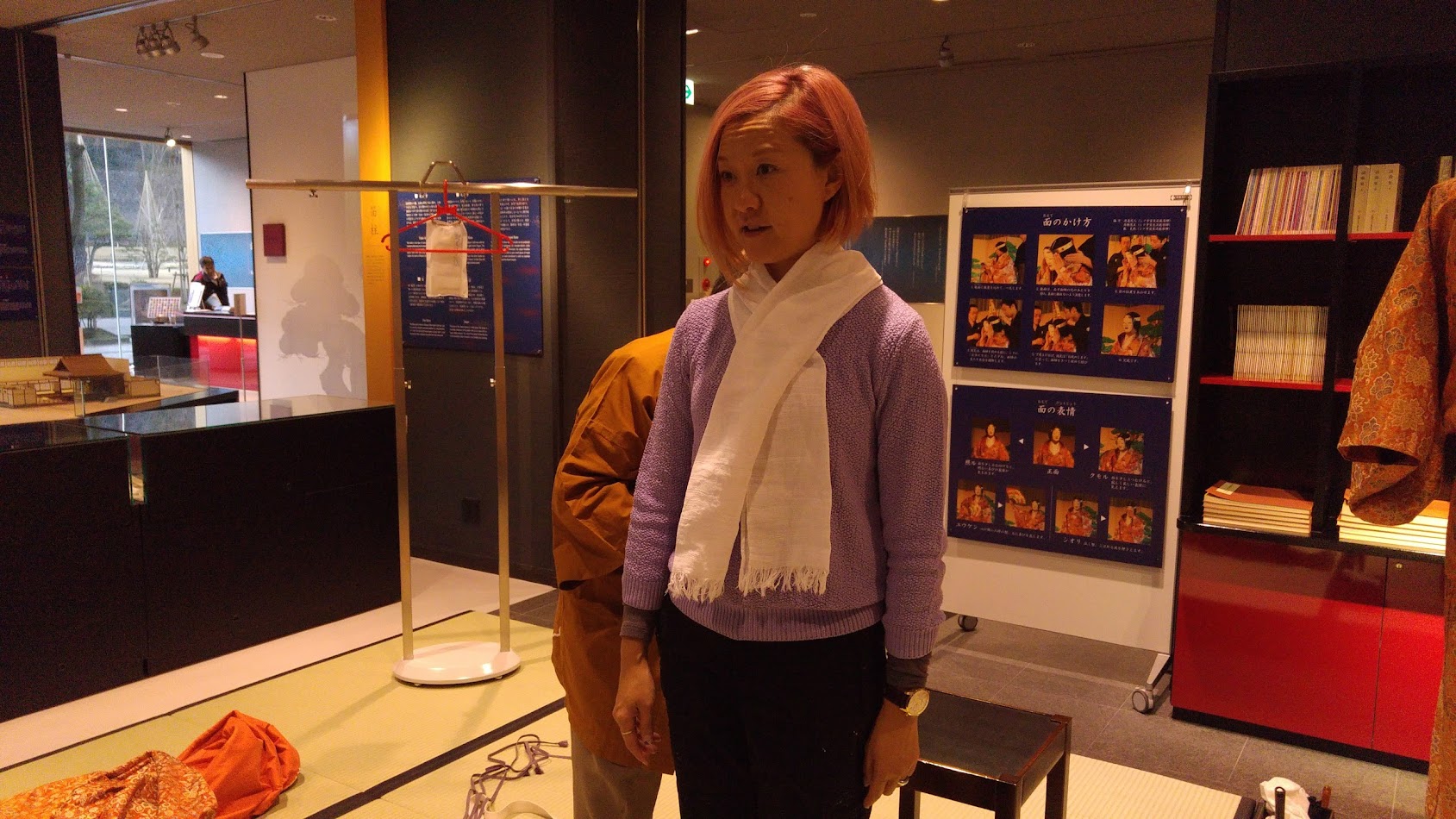 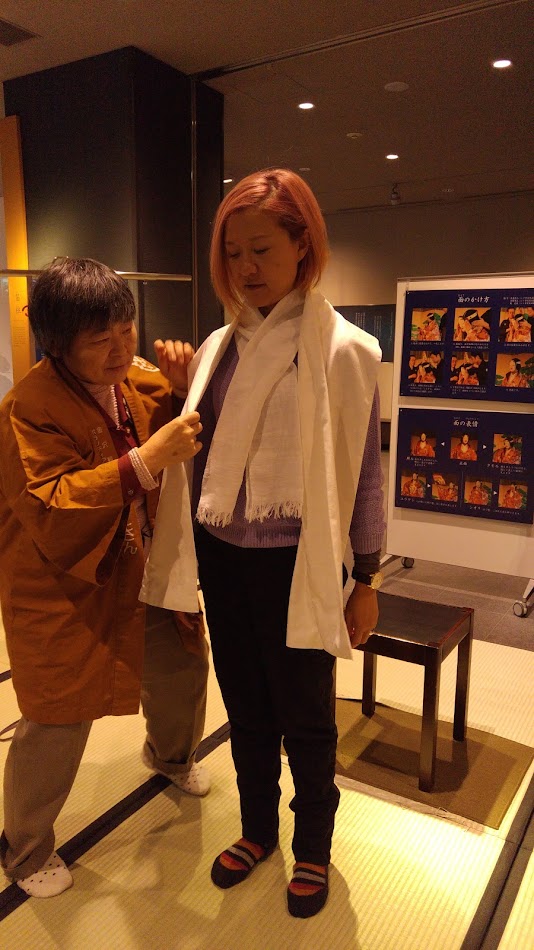 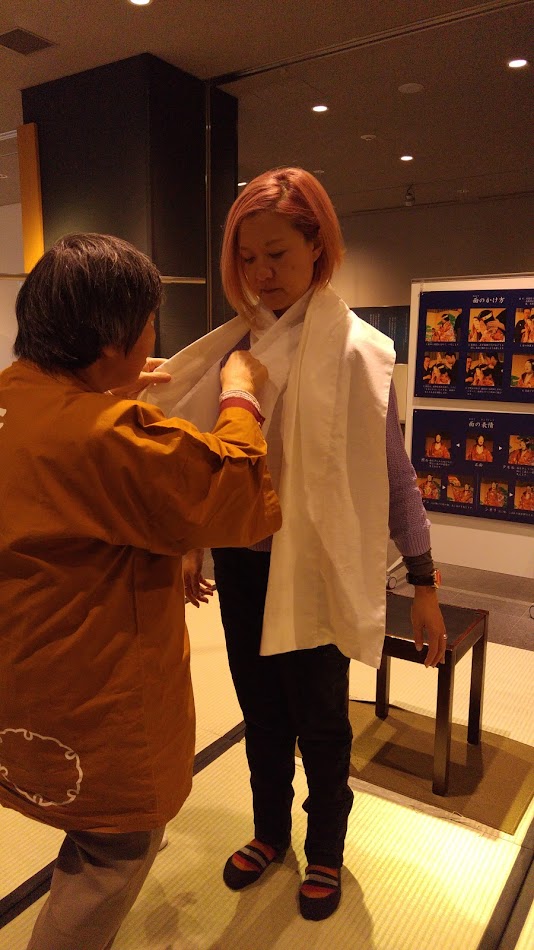 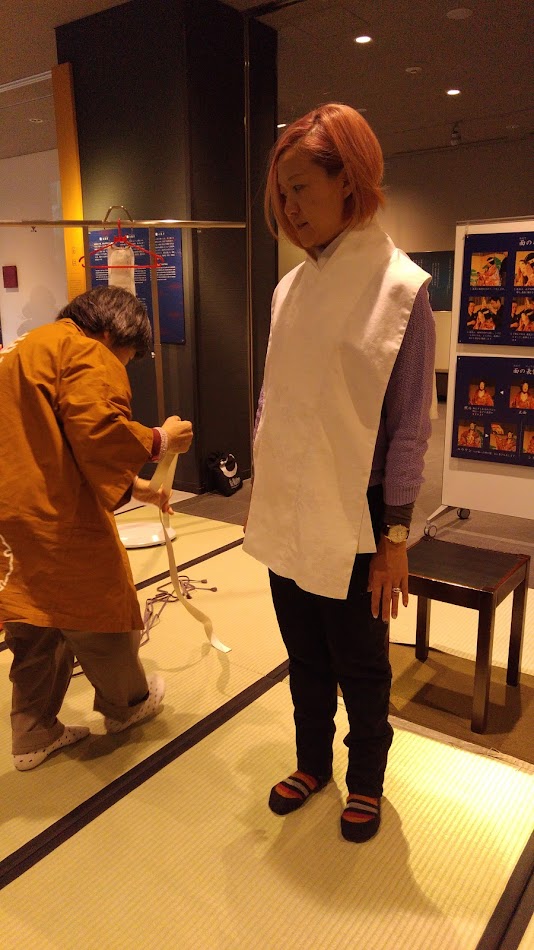 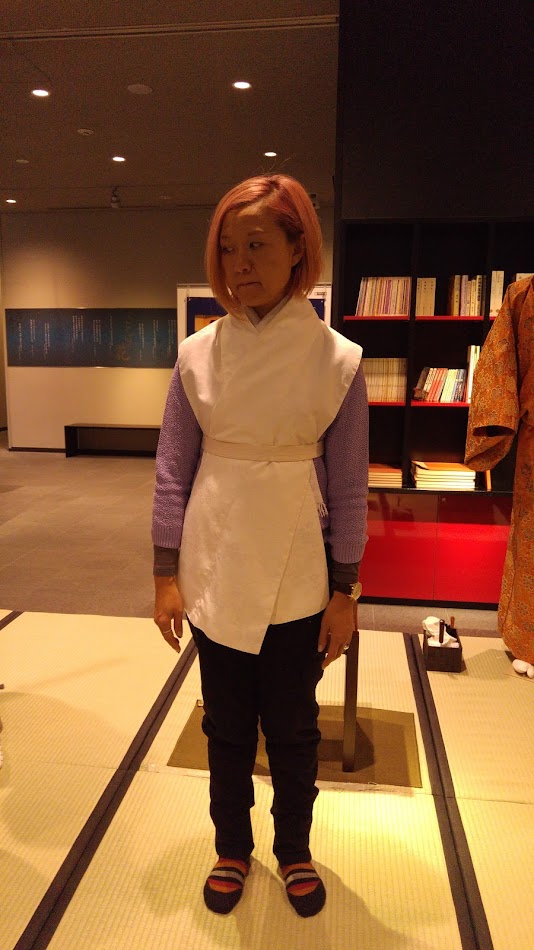 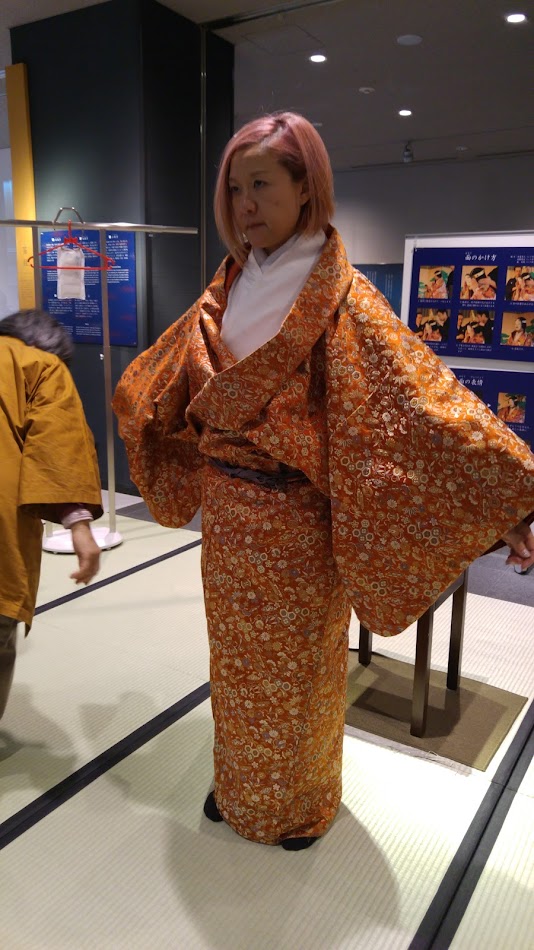 The mask was brought to me and I was once again reminded that I could not touch the mask on its face.

I was shown how to touch it – to take it from Mrs. Aikawa – by touching only the places on the side where the string/rope go through the mask. And no where else.

I was given the mask with its face facing towards me, and after I held it, I was asked to bow to it and to say Thanks. By doing so, I was Thanking Magojiro for allowing me to wear her, to take on her identity as a young woman. 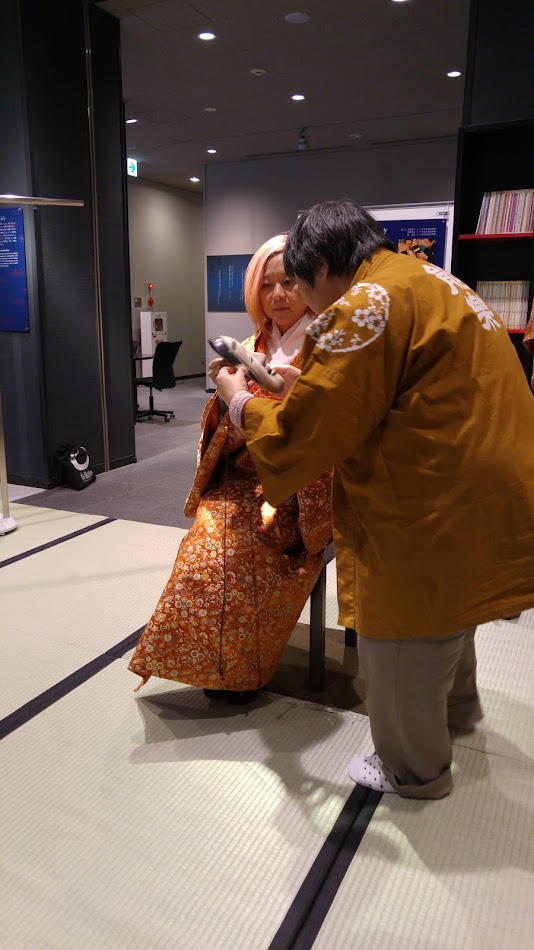 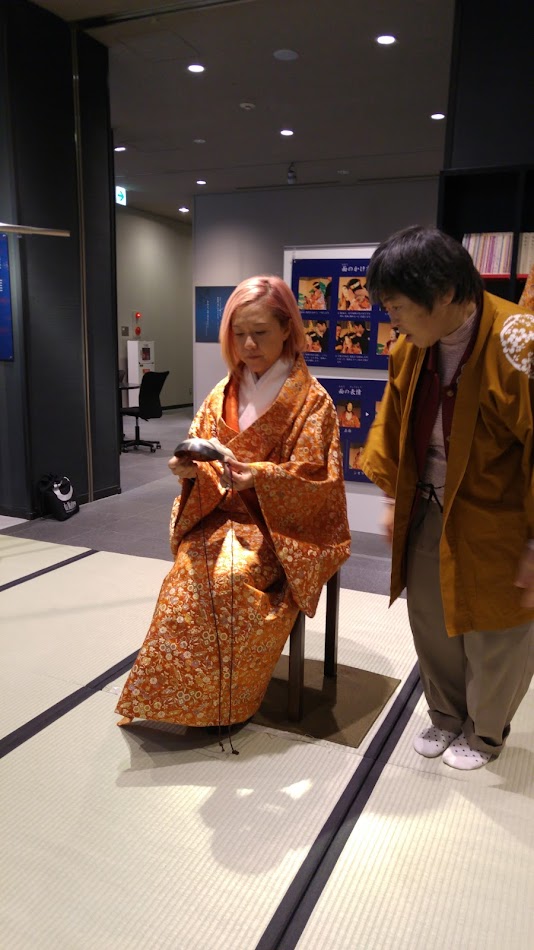 Once I bowed to Magojiro her and Thanked her, Mrs Aikawa then helped me turn the mask facing away from me, and to raise it to my face. All the while, I am looking at myself in the mirror, wearing a gold threaded orange kimono, obi hanging loose, sleeves raised to my head, with a mask lingering over half my face. I could see Magojiro looking back at me, ready. 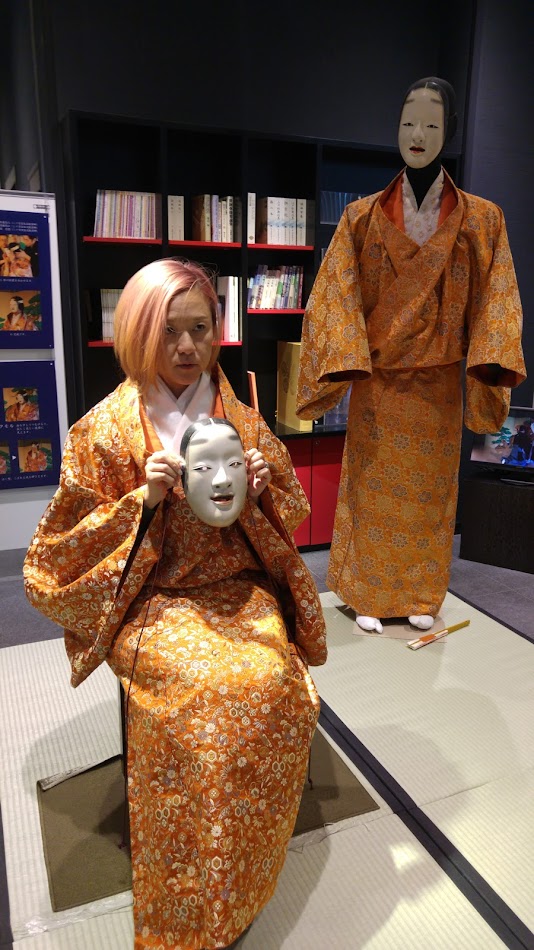 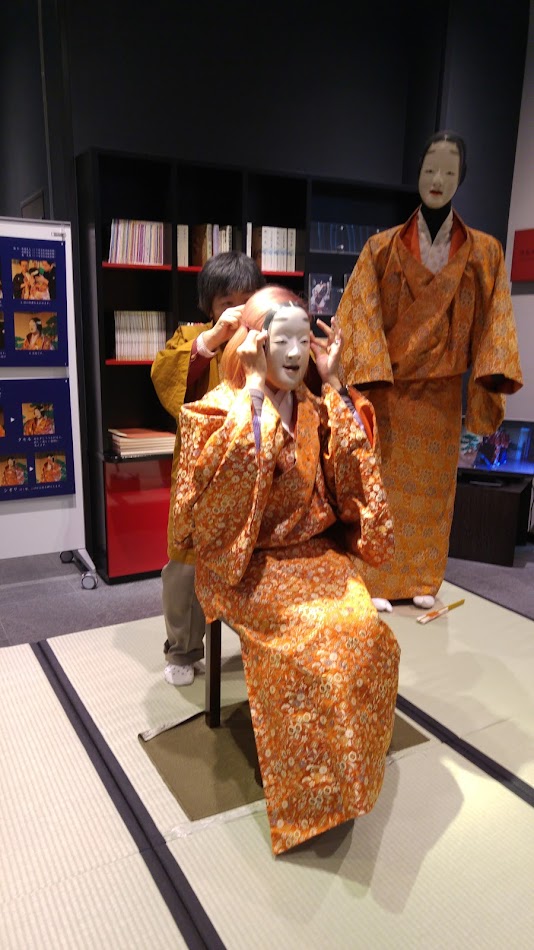 Once I put on the mask, it felt like “we” were “in character”. Magojiro’s hands were delicate, her hint of a smile was gentle and she tilted her head. I tilted my head. 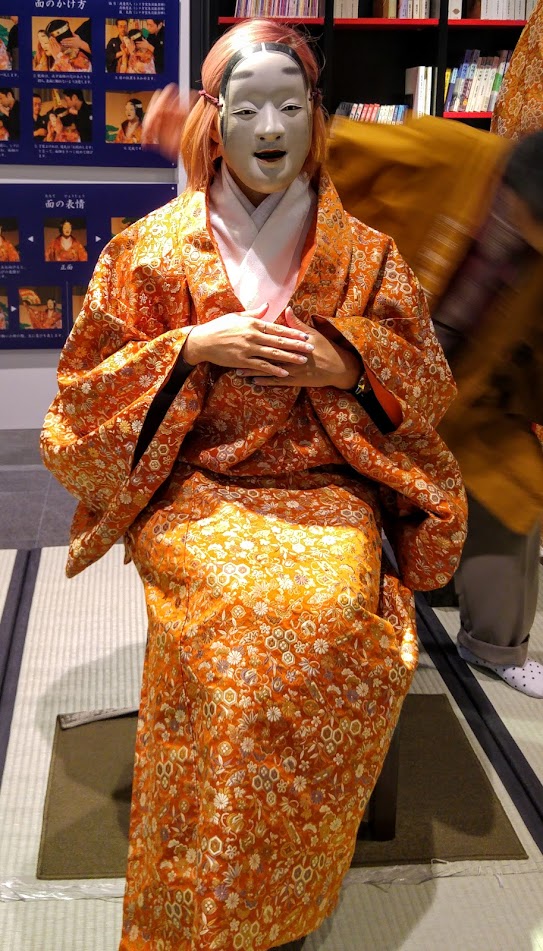 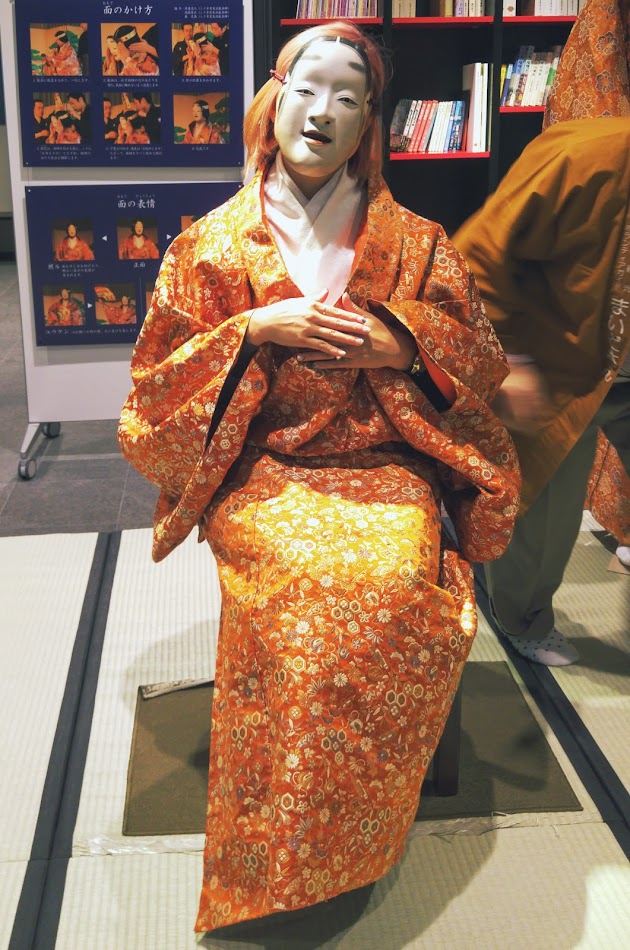 I didn’t even realise until later that my hands were positioned in a very formal gesture, across my body.

The eyes of the mask made it hard to have peripheral vision, but I could see myself in the mirror quite well.

Magojiro took a fan from Mrs. Aikawa and she moved along the stage in small steps that did not leave the ground, a more graceful version of me, earlier. Mrs. Aikawa helped me place my hands in the correct Noh positions and stance. 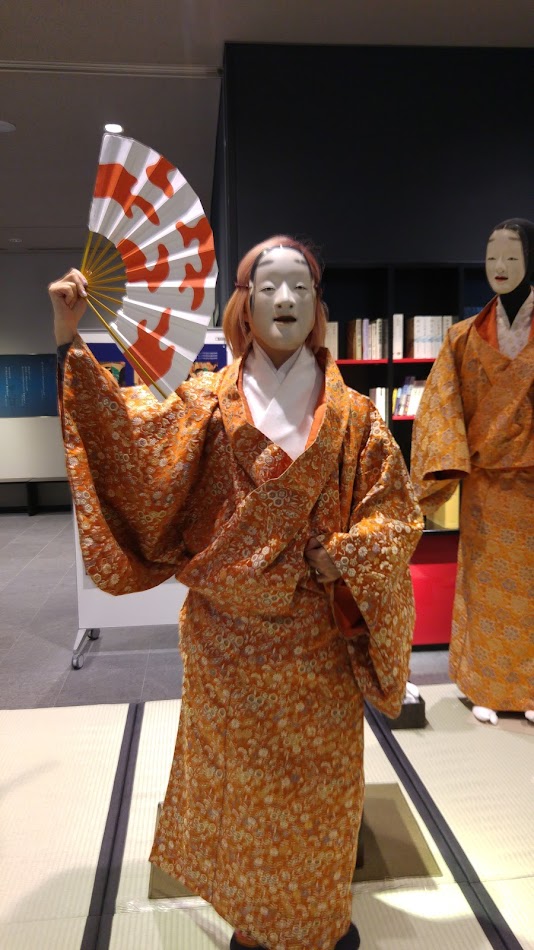 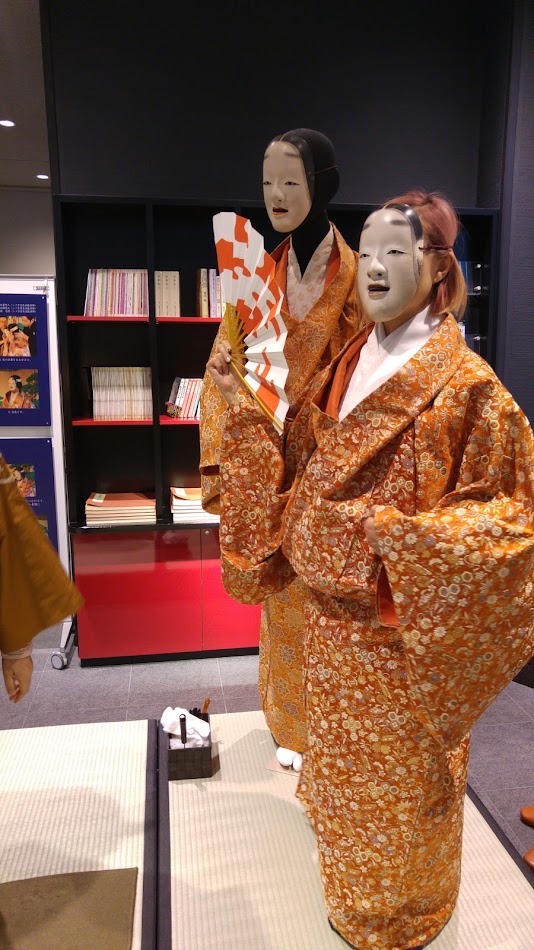 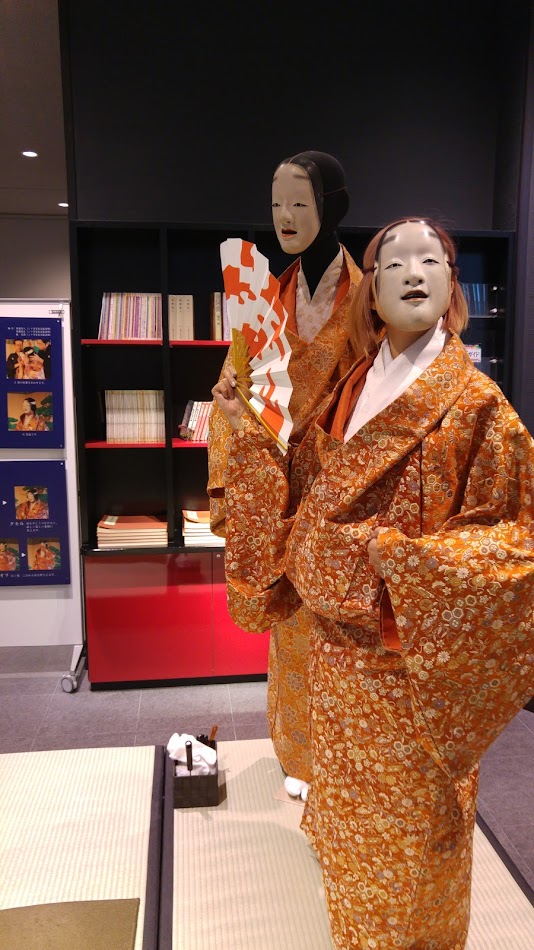 The fan moved back and forth slowly, and my body turned, still seeing myself, now in the wall mirror next to the stage. Me. But not me. Magojiro-Me.

Magojiro’s head tilted shyly to my mother who was taking photos. Her face was curious, laughing, peeking behind the fan. 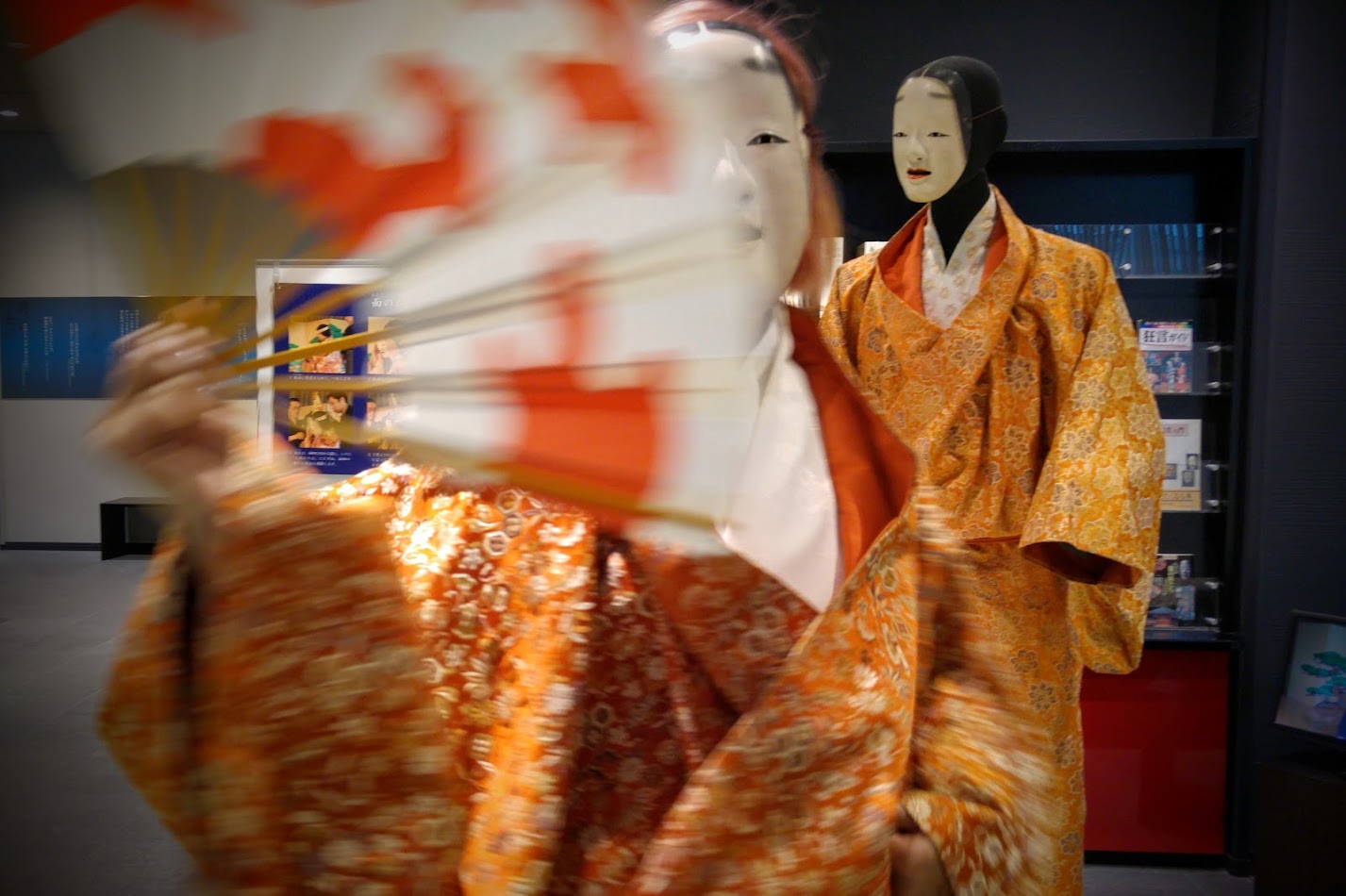 Physically, you don’t feel like yourself because it’s very disorientating wearing the mask. You can barely see your own body, your peripheral vision is gone, so you feel very displaced, you can’t see your own movements as you normally would. There is a feeling you’re not comfortable in yourself anymore.

It was also hard to walk around and I was wearing a beautiful ethereal kimono which added to the unfamiliar experience. So all this adds to the out of body experience, but it was not scary, actually. Just different. Overall, it did feel quite nice. Welcoming.

After a few munites, I felt like it was time to say goodbye. It was not uncomfortable in the least, but it was as if I was experiencing something for the very first time and I wanted to end it at its peak.

Taking off the mask had the same amount of ritual. I was seated back in the chair at the corner of the stage, in front of the long mirror, and Mrs. Aikawa helped me take off the mask, bow to it and Thank Magojiro yet again.

The connection between the carver, the mask and the wearer was a very powerful demonstration of the respect the Japanese have for animism. So if you want a really immersive Noh theatre experience, you must go to Kanazawa’s Noh Museum. Who knows who you will become on stage?