Sushi – it's what everyone thinks of when they think "Japan".

Well, this sushi bar offers you something a little different. Naomichi Yasuda was head chef & part-owner of the legendary "sushi yasuda" in NY since 1999. He's since left North America, and has opened up a place in Tokyo – Sushi Bar Yasuda.

Here's the background – he's no longer affiliated with the NY joint, but they still use his name. He was pretty upfront and honest about why he left. Short story – he does it for the love of food. The old place doesn't. Ask him yourself when you go there.


Well, we didn't know the glitzy background when we went. The most we knew was from a friend in Sweden. They'd asked their fave sushi chef where he'd go in Tokyo to eat, and his reply was Sushi Bar Yasuda. We also watched a 2 min vid on YouTube with Anthony Bourdain showcasing Yasuda which was mostly Bourdain eating blissfully with his eyes closed and Yasuda-san on a scooter going to Tsukiji fish markets. So we were pretty clueless and going on the recommendation based on a good feed.

So what's Sushi Bar Yasuda like and why is it different?

A tiny place out of the hustle and bustle of the main tourist sites, it only sits about 8 at the bar. There are 2 small tables, but the main action is at the bar. Intimate.

Yasuda-san works the sushi bar alone. There's no other chef or assistant. There are 3 cooling boxes he uses. Each has a temperature that suits different produce.

In such a small setting, your eating experience covers part performance, conversation, and education.

Having lived in NY for years, he speaks English fluently and is open to pretty much any questions, as long as you're able to handle the sarcastic and irreverent replies. Prepare to banter.

When asked about specials: "Special? You worry when the chef says it is 'special'. It means it may come from last week."

When 2 types of sea urchins are served: "These are sea urchin from Japan and Russia. Not from Idaho."

When asked about "popularity": "I am NOT a celebrity chef"

Lots of laughs and banter. And the man knows his knife skills. And has mad guns. So don't piss him off.

1. Order the sake. You'll get a confectionary-like selection of sake glasses to choose from. Choose wisely. I suspect it's a psych test so Yasuda-san can judge you secretly. I kept thinking about the pivotal scene in "Indiana Jones and hte Last Crusade" movie…."choose wisely"…or DIE. Anyway. We ordered 3 types of sake throughout dinner. You get to change sake glasses. Do it. It's fun. (The below fuzzy photo is not an indication of my soberness). 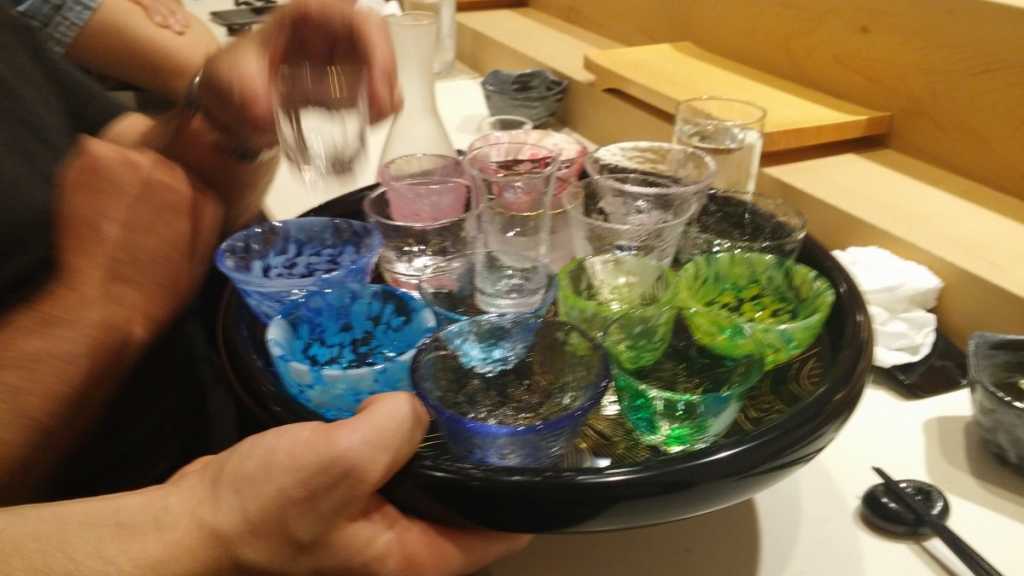 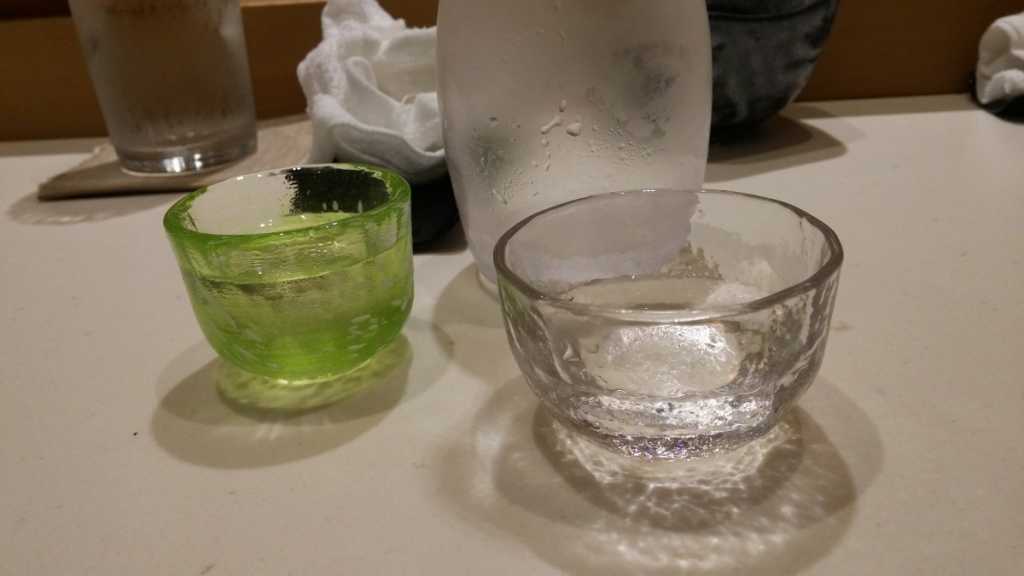 The below golden one was my favourite to drink out of. Very nice mouth feel (yes, that's the technical term for it. tbh idk…). 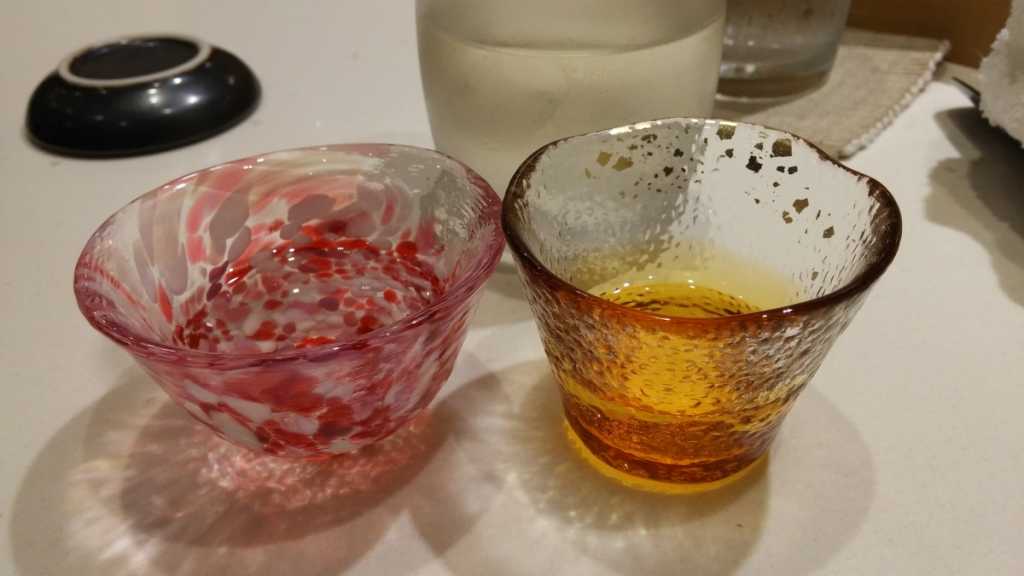 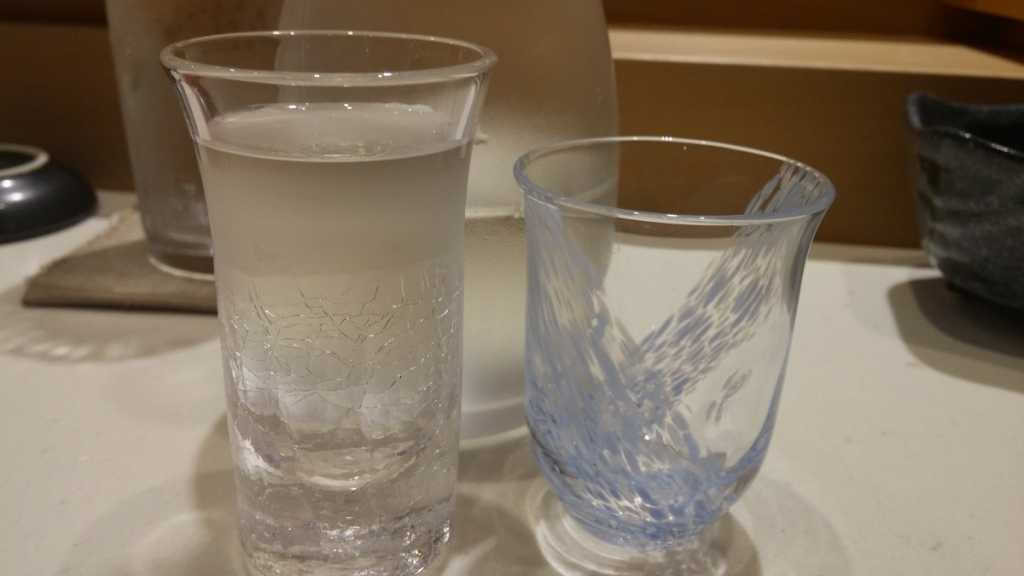 2. Get the Omakase. Yasuda-san chooses what you eat. You tell them any food preferences and he caters to it.

3. Eat within 15 seconds of the sushi being served. I got tipsy and left the toro for longer and it goes past it's optimal taste. Got a reprimand. Sorry Yasuda-san. Selection we were served was: 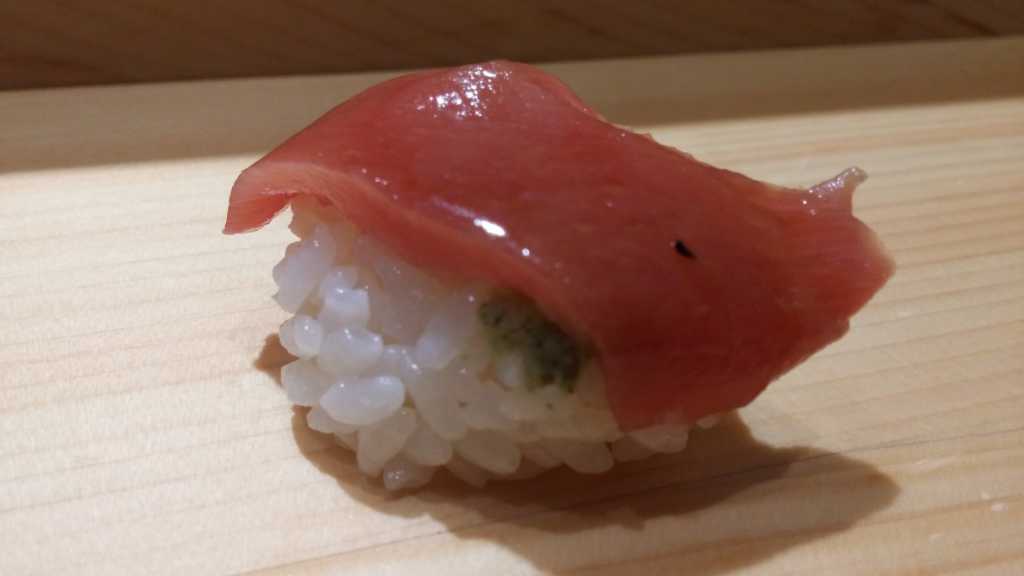 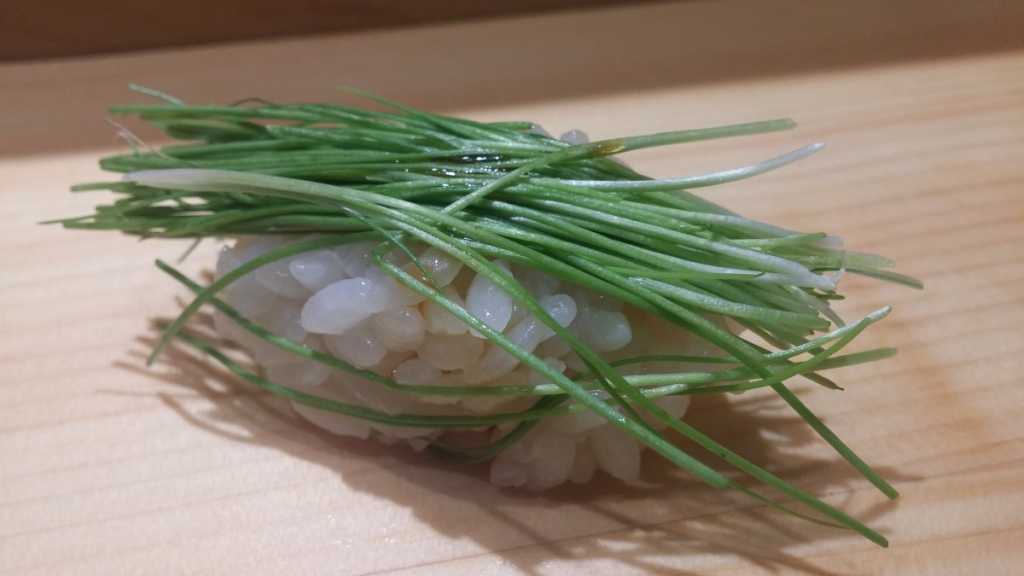 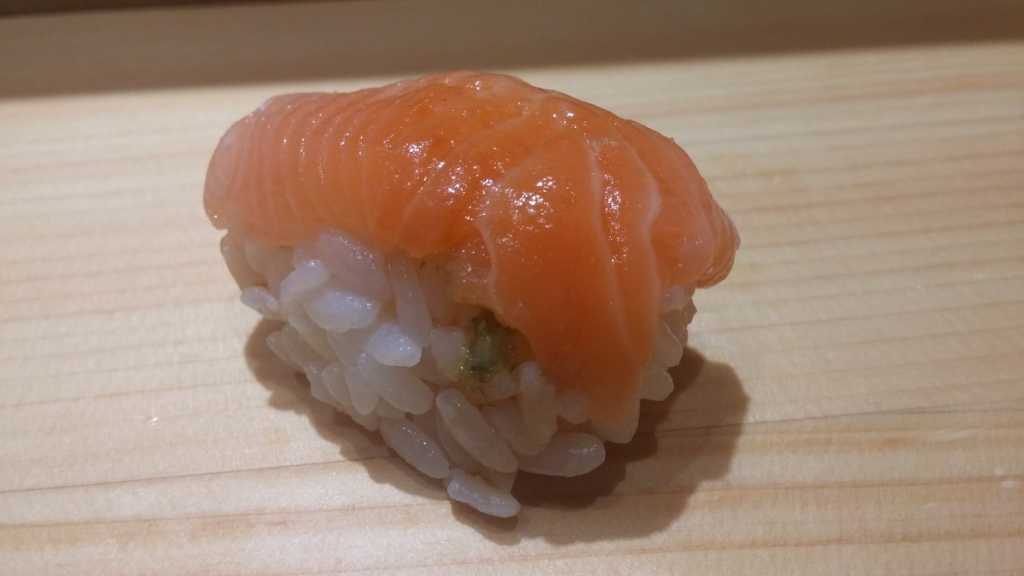 Below was a something I'd never tried before.

Really interesting flavour – asparagus & fern like texture. In Japanese, this is called Taronomi. Spring shoots. Haven't had this before. 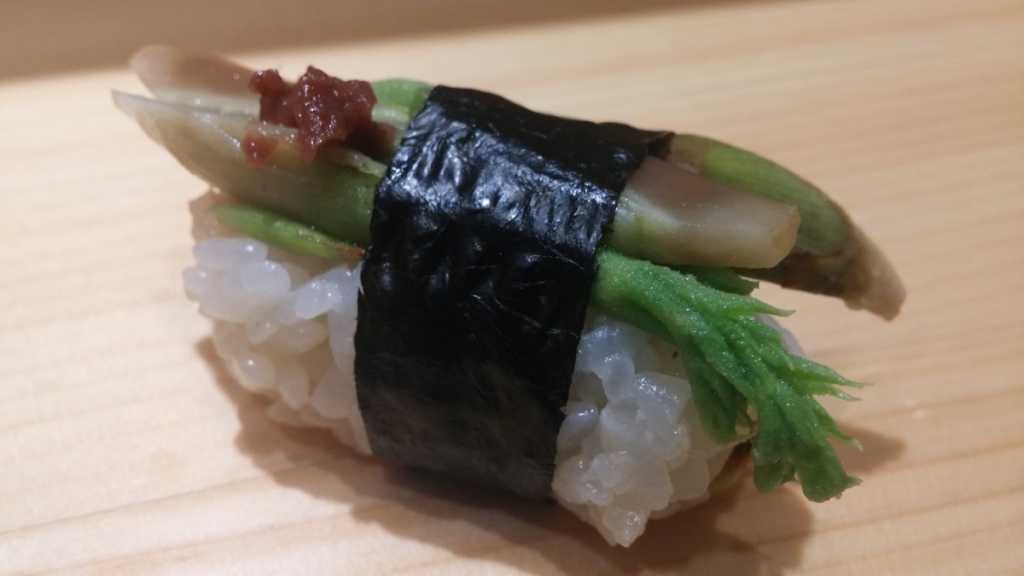 Again, something I'd never had before. Nanohana. Slightly bitter and sweet. Google tells me it's rapeseed. 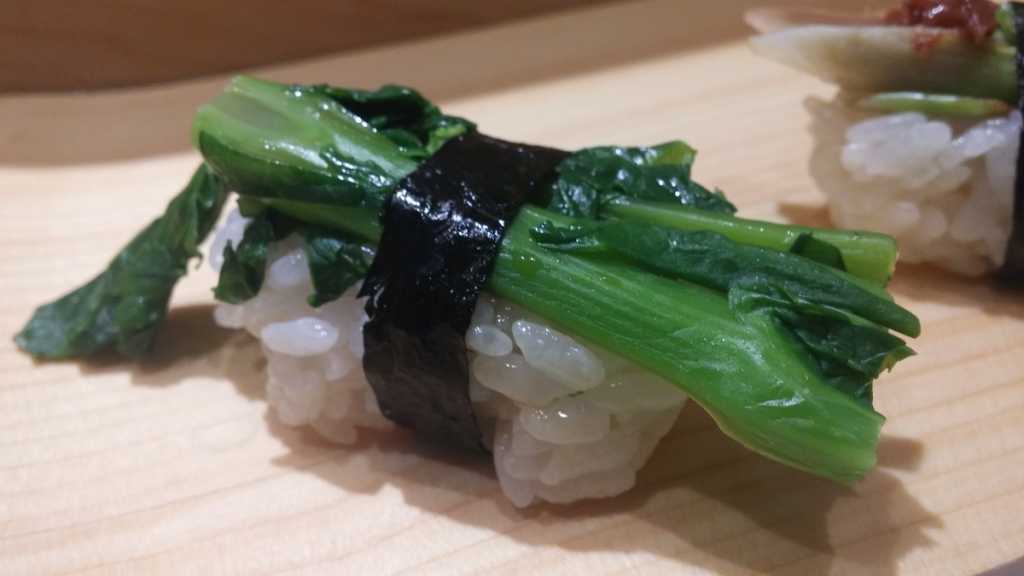 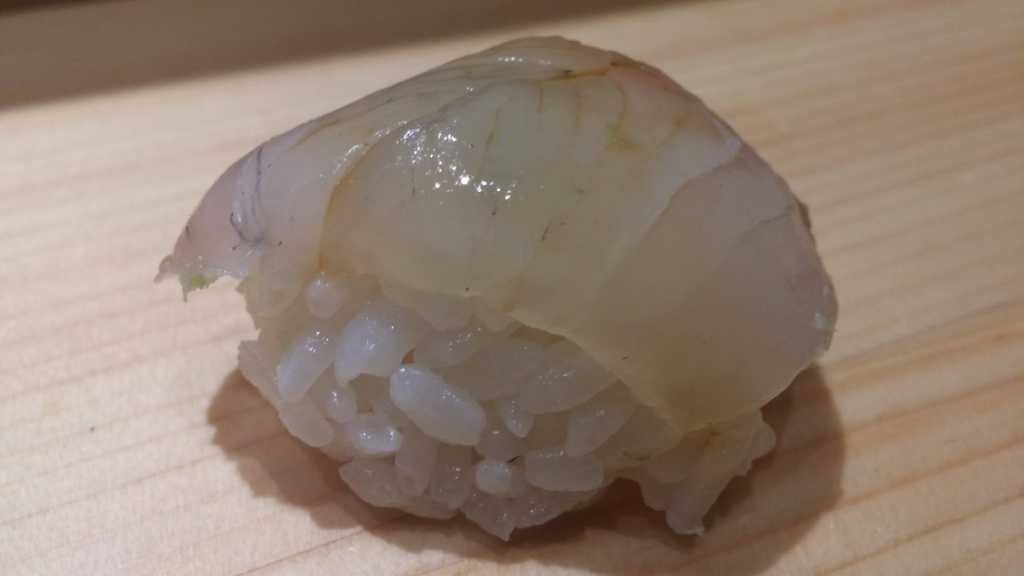 Toro – part just under the skin. Tuna are pretty fit animals, so you can imagine the knife skills to get this. 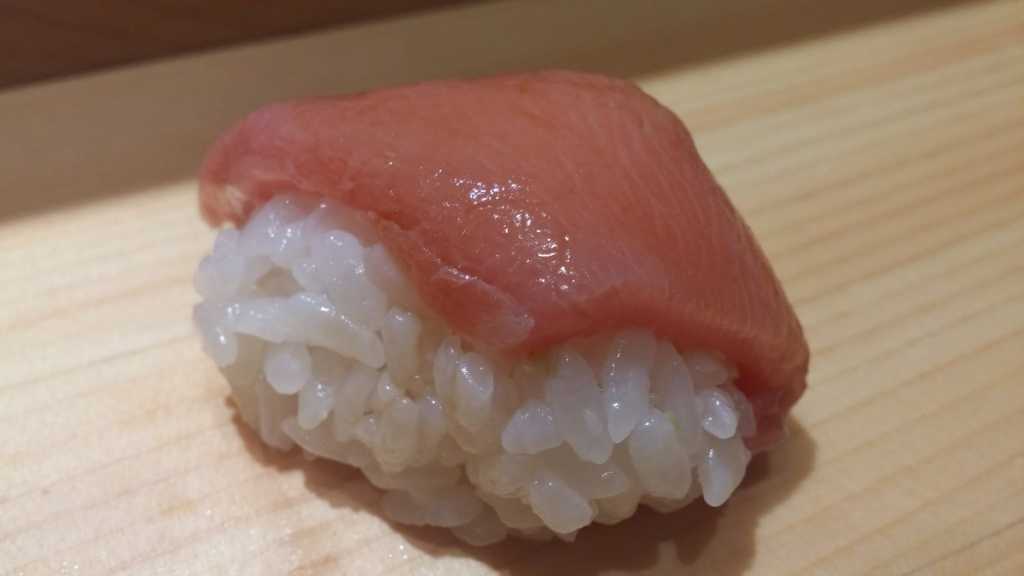 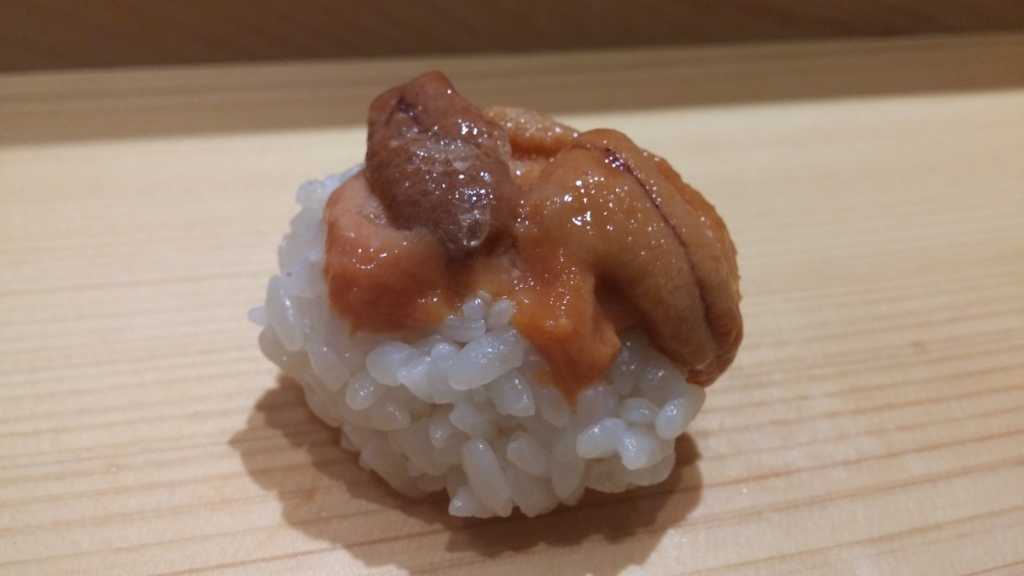 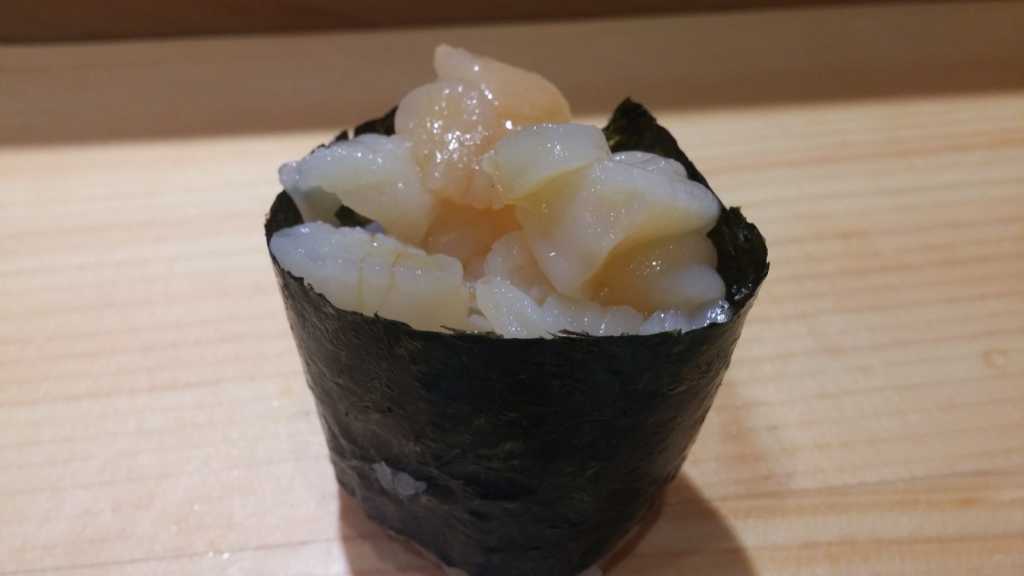 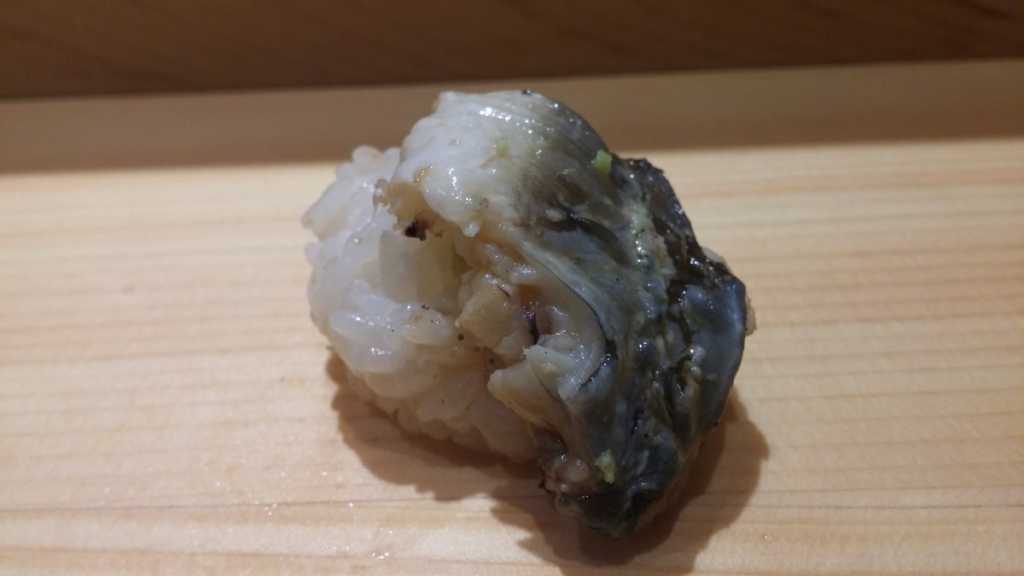 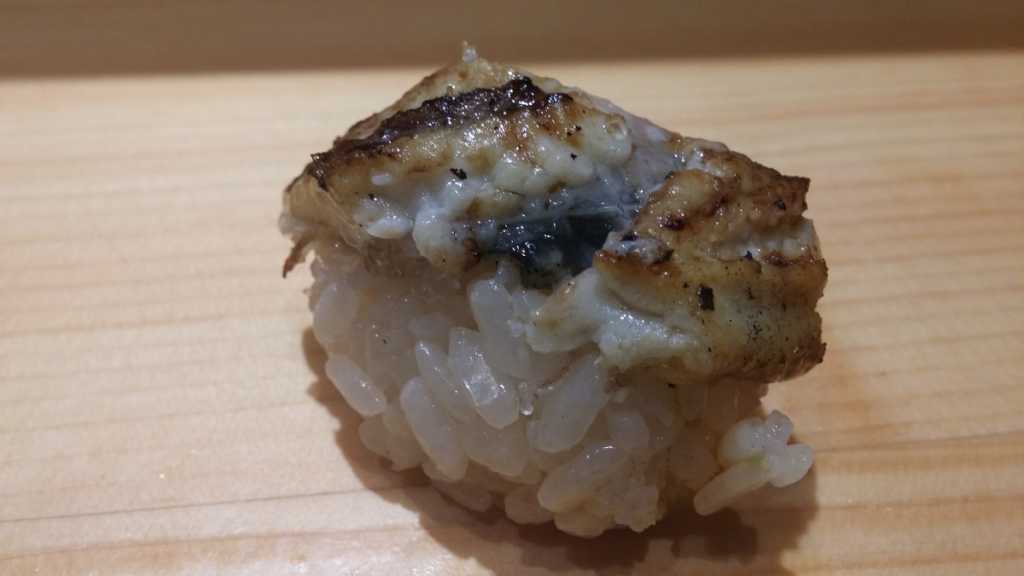 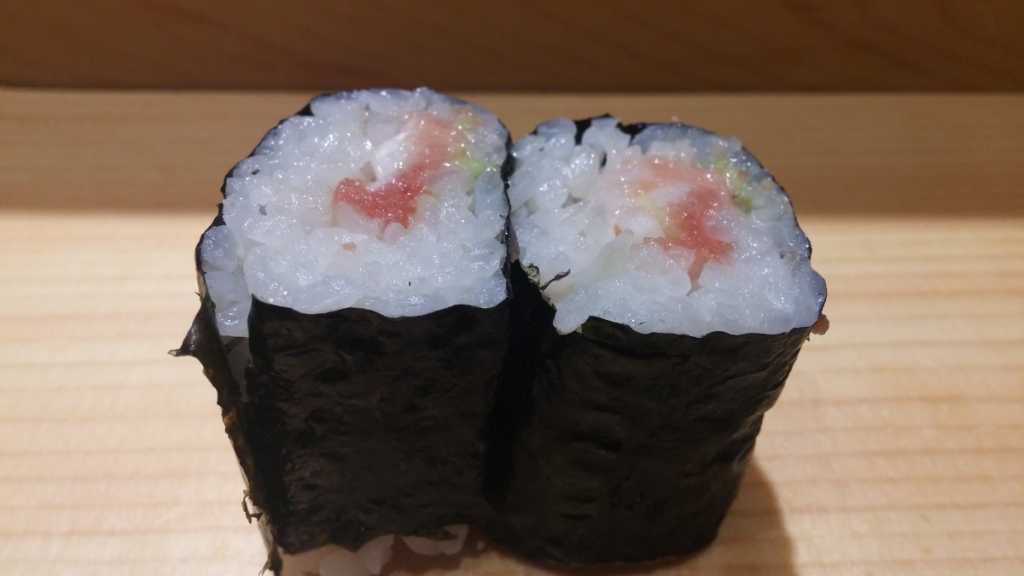 4. Ask him anything you want. He's eager to teach what he's learnt. From the fridges he uses to the tools in the kitchen, to why he chose his location, to his family, his daily schedule and how he started his career. Photos are allowed (can you tell?).

Other notes on Yasuda-san's skills?

Note on the seaweed used – Yasuda gets "gift" grade seaweed. What does this mean? Well, basically, "restaurant" grade seaweed is flexible. It can be molded around the sushi. "Gift" grade is a higher grade and is not used by restaurants as it cracks when a chef tries to manipulate it, bend it into sushi. Yasuda uses the higher "gift" grade as he has mad skillz. The supplier of "gift" grade seaweed didn't think Yasuda-san could use it on sushi. He proved them wrong.

We asked him about his knife. It's a "tesobocho" knife (my notes were slurred so I have no idea if this is the right spelling, it's just audio-memory), made by Kaneso (THIS, I know is right because the waiter gave us their name). His favourite knife. He actually found it in a trash at a building site, and he recognised the type of knife it was. So he picked it up, fixed the handle, took it to Kaneso knife shop and got it back into working order. He sharpens it "only everyday". When he got it, it was about 60cms long, and now it's less than 30cm long. That's a lot of sharpening over 3 years. He's changed the hilt a few times. He sees it as an extension of his finger, so watch out when he points.

He catered dishes to couples from San Francisco, Seattle, a family (parents and 2 kids) from Austin, Texas, and us drunks Aussies from Sydney. He was so warm to the kids, took their requests kindly, and was really helpful and was not condescending when explaining how to eat sushi.

"If not with chopsticks, then use your fingers".

The experience is not worshiping at the temple of sushi, neither is it a silent serious detention at Yasuda-san's preperatory school of sushi knowledge. Don't go in there stiff. Ask questions. He's proud of his establishment and his food. Rightfully so, but he does not have a god complex.

We thoroughly enjoyed ourselves. And yes, the sushi was melt-in-your-mouth delicious.

Be yourself, be nice to all the staff, and he may just tell you a bit more about himself than the usual "This is tuna. Not from Jersey." 😉

Question: "Do you think you're still learning?"

Immediately: "Of course, I am always learning." 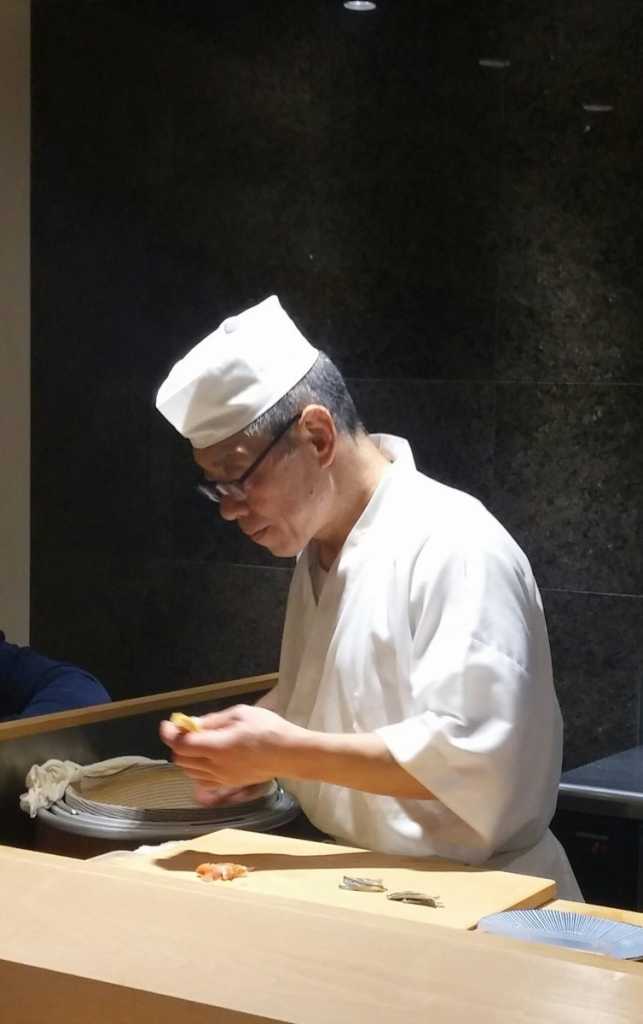 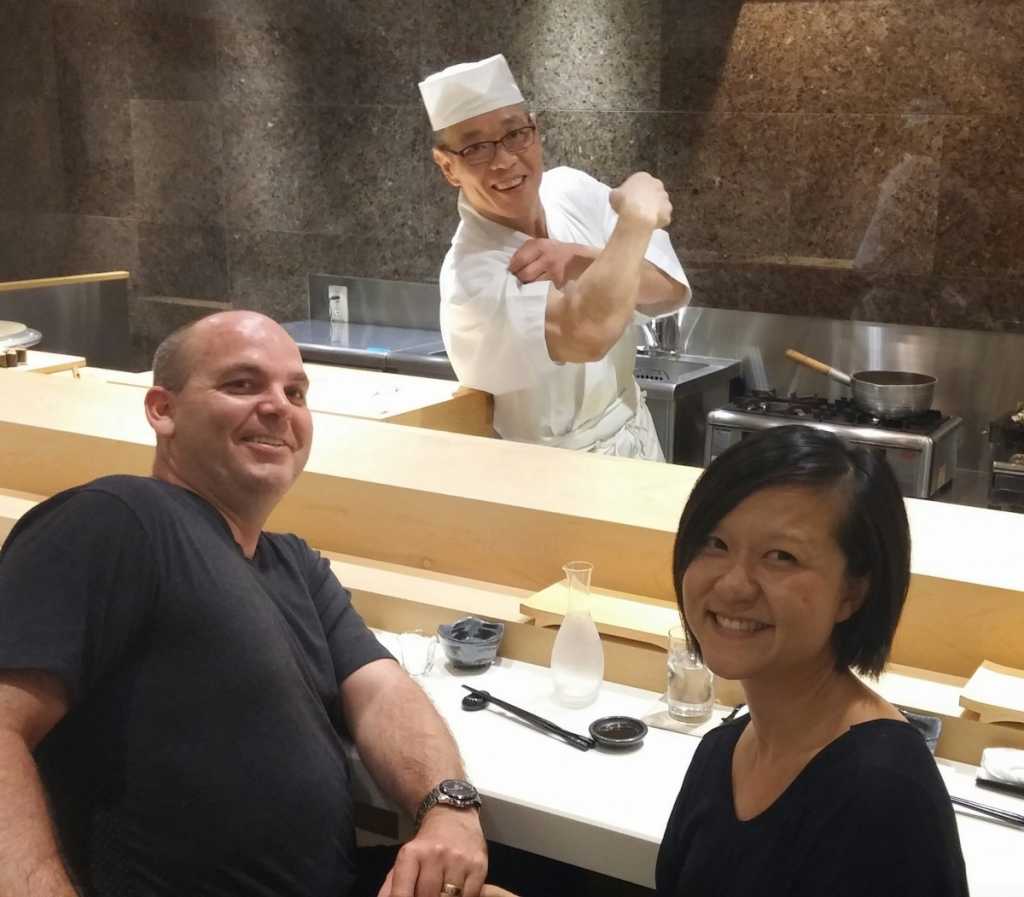